Vice President Kamala Harris will meet “virtually” with Mexican President President Andres Manuel Lopez Obrador and other top officials next month — as part of her efforts in dealing with what the administration describes as the “root causes” of the border crisis.

“On May 7, Vice President Kamala Harris will meet virtually with Mexican President Andrés Manuel López Obrador, who will be joined by Secretary of Foreign Relations Marcelo Ebrard Casaubon and Secretary of Economy Tatiana Clouthier Carrillo,” her office said in a statement.

“This meeting will deepen the partnership between our countries to achieve the common goals of prosperity, good governance, and addressing the root causes of migration.”

Harris has come under fire for not having visited the border since being made the point person for the crisis, and has gone 31 days without holding a press conference on the matter.

The White House has pushed back on that criticism, saying she is in charge of diplomatic talks involved in targeting the root causes of the crisis, not the border itself.

“I have been asked to lead the issue of dealing with root causes in the Northern Triangle, similar to what the then-Vice President did many years ago,” she said at a recent event. “But I will tell you these are issues that aren’t going to be addressed overnight.” 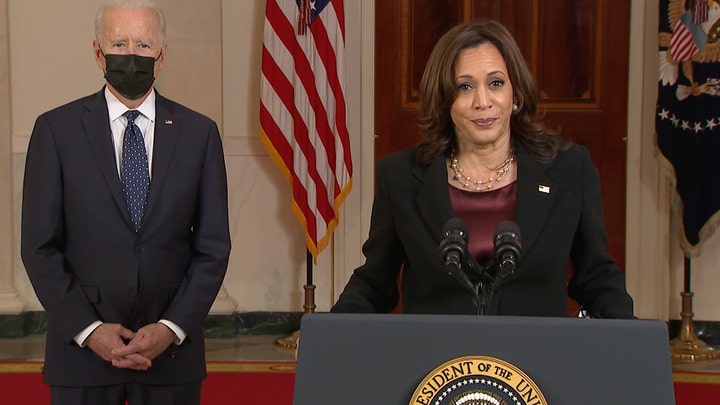 Republicans and other critics have blamed the dramatic liberalization of immigration and border policy by the Biden administration for the surge that has seen more than 172,000 migrants encountered in March along — including record numbers of unaccompanied children that have overwhelmed border facilities and led to images of packed children side-by-side in centers.

Critics have pointed to the rolling back of the “Remain-in-Mexico” policy which kept migrants south of the border, efforts to grant amnesty to illegal immigrants already in the country, and the Biden administration’s decision not to apply Title 42 public health protections — which allows migrants to be expelled quickly — to unaccompanied children.

But the Biden administration, while denying a crisis at the border, has emphasized factors like poverty and climate in Central America.

“And we are looking at, therefore, a number of issues that also relate to poverty, extreme poverty. And also there’s violence obviously coming out of those regions,” she said. “When you look at the root causes, we’re also looking at issues of corruption. Again, we’re looking at the issue of climate resiliency and then the concern about a lack of economic opportunity.”

Harris will meet on Monday with Guatemala’s President Alejandro Giammattei. She also spoke to Lopez Obrador by phone earlier this month.

In addition, Harris plans to travel in June to the Northern Triangle region of Central America, Fox News has learned. But the precise itinerary for the vice president was unclear. The region includes Guatemala, El Salvador and Honduras.

Meanwhile, while Harris has herself not been to the border, images emerged showing copies of her children’s book being distributed to unaccompanied children in a migrant shelter in California.