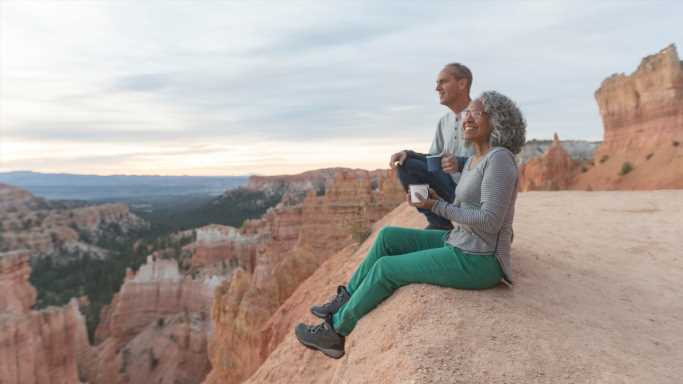 Retirement may be the end of a career, but it is also the start of a new chapter of adulthood. Most people know when they can or want to retire. Where to retire, however, may be a more complex decision to make.

To rank the best and worst states for people who want to stay active, both physically and socially, in retirement, 24/7 Tempo used data from the U.S. Census Bureau and the Centers for Disease Control and Prevention (CDC). We created an index of more than 20 measures of retirement-friendliness, representing four categories: environment, health-related factors, social support and demographics.

One advantage of retirement is that a person is not limited to living in their current state. Many retirees relocate to experience a different way of life in a new environment. It is hard to look past sunshine and nice weather year-round, as well as a large number of retirement communities and social events.

To stay happy as well as healthy in older age, it is important that people eat a healthy diet, avoid unhealthy habits like smoking and get preventive medical care like vaccinations and disease screenings. It is important that retirees have a good idea of what their cost of living will be so they can make plans, save and avoid financial hardship.

Utah is the best state for retirees. Here are the data:

Our methodology: To determine the best and worst states for older citizens, 24/7 Tempo created an index comprising 22 measures in four categories: health factors, environmental factors, social support and the share of the population 65 years old and over. These categories aimed to capture the essential elements of quality of life for retired adults. We created an index for each category to rank each state by these criteria, as well as an overall index. Each category was given equal weight in the index.

Population estimates, including the share of the population 65 years old and over, as well as the average retirement income, and the percentage of adults 65+ living under the poverty line, were obtained from the U.S. Census Bureau’s American Community Survey and are for 2019.

National parks and site data for each state was obtained from the National Park Service and includes sites that are either affiliated or managed by the service. The average hours of full sunlight per day were calculated from data provided by the CDC’s North America Land Data Assimilation System. These calculations were based on the aggregate average kilojoules of sunshine per square meter for the years 1979 to 2011 and converted to kilowatt-hours per square meter. A peak sun-hour is a period during which the intensity of sunlight exceeds 1,000 watts per square meter.

The percentage of adults 65 and older that reported volunteering in the past 12 months was obtained from America’s Health Rankings analysis of Corporation for National & Community Service (AmeriCorps) data from 2017. The share of adults 65+ who met CDC exercise guidelines in 2017 and the share of adults 65+ who reported good or excellent health in 2018 were obtained from America’s Health Rankings in its analysis of CDC data. Data on membership associations per 10,000 state residents was obtained from 2018 state-level data provided by the 2021 County Health Rankings & Roadmaps, a Robert Wood Johnson Foundation and University of Wisconsin Population Health Institute joint program.

Click here to see all the best and worst states for retirees.