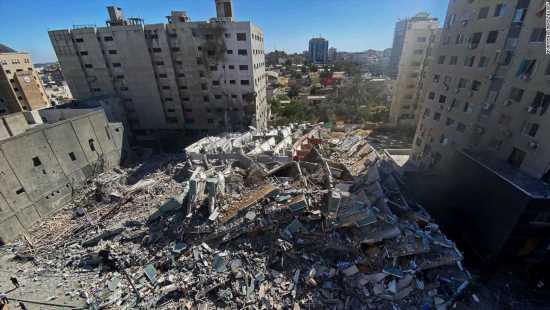 (CNN)The Associated Press, Al Jazeera, and media advocacy groups are demanding answers after an Israeli airstrike destroyed a building with offices belonging to news outlets in Gaza on Saturday.

The Israeli Defense Forces said the building contained “Hamas military intelligence assets.” The IDF accused Hamas of treating the journalists as “human shields.”
But the blowback was swift. “We demand that the Israeli government provide a detailed and documented justification for this military attack on a civilian facility given the possible violation of international humanitarian law,” said Joel Simon, the executive director of the Committee to Protect Journalists, hours after the strike leveled Al Jala’s building.

And the Foreign Press Association in Israel, a non-profit representing hundreds of journalists, expressed “grave concern and dismay” at the targeting of the building. 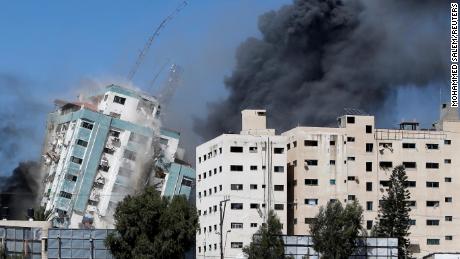 “Knowingly causing the destruction of the offices of some of the world’s largest and most influential news organizations raises deeply worrying questions about Israel’s willingness to interfere with the freedom of the press to operate,” the association said. “The safety of other news bureaus in Gaza is now in question.”

The association requested an immediate meeting with Israel officials.
The IDF shared its justification in statements and on social media after the blast. “After providing advance warning to civilians & time to evacuate, IDF fighter jets struck a multi-story building containing Hamas military intelligence assets,” the IDF said on Twitter. “The building contained civilian media offices, which Hamas hides behind and deliberately uses as human shields.”
Further, the defense forces said in a statement that the building housed a Hamas research and development unit operating technological equipment against Israel, which constituted “a unique asset to the Hamas terrorist organization.”
Al Jazeera, the Qatari-owned network with bureaus around the world, was not satisfied by any of the explanations. Mostefa Souag, acting director general of Al Jazeera Media Network, called it “a blatant violation of human rights and is internationally considered a war crime.” 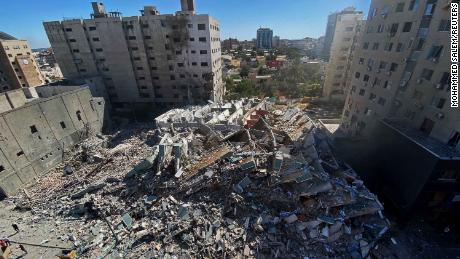 “The aim of this heinous crime is to silence the media and to hide the untold carnage and suffering of the people of Gaza,” Souag said in a statement. Israeli officials cast the bombing as an attempt to silence Hamas, not the media.
No one was reported killed in the attack, but it was a close call, the US-based Associated Press said.
“We narrowly avoided a terrible loss of life,” AP CEO Gary Pruitt said. “A dozen AP journalists and freelancers were inside the building and thankfully we were able to evacuate them in time.”
Pruitt said The AP is “shocked and horrified” by the attack, and concluded his statement by saying, “the world will know less about what is happening in Gaza because of transpired today.”
Fares Akram, an AP correspondent in Gaza, wrote on Twitter about running down the stairs “from the 11th floor” during the evacuation.
He said he and his colleagues were “leaving behind our best memories” from the bureau.
The IDF, citing “clear international law,” said Saturday that “when Hamas uses a tall building for military purposes, it becomes a lawful military target.”
But its sterile words may be no match for the emotional and visceral reactions to the videos of the collapsing building, which were shown live on Al Jazeera and shared widely on social media on Saturday. 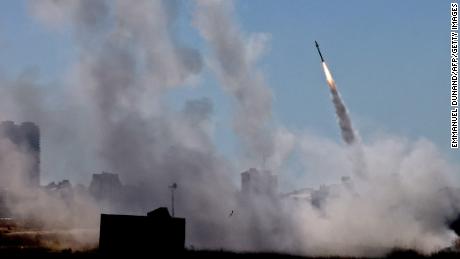 Officials in the US moved quickly to express support for press freedom.
“We have communicated directly to the Israelis that ensuring the safety and security of journalists and independent media is a paramount responsibility,” said White House press secretary Jen Psaki.
Later in the day, Pruitt said “the Israeli government says the building contained Hamas military intelligence assets. We have called on the Israeli government to put forward the evidence. AP’s bureau has been in this building for 15 years. We have had no indication Hamas was in the building or active in the building. This is something we actively check to the best of our ability. We would never knowingly put our journalists at risk.”

The AP’s story about the bombing suggested that the burden of proof was on Israel. Regarding the Israeli military’s justification about journalists being used as human shields, the story noted that Israel “provided no evidence to back up the claims.”
The story added, “It also was not clear why the military took down an entire building filled with media offices and residential apartments. The military has carried out scores of pinpoint airstrikes, including in the current round of fighting, that targeted single floors and even single apartments.”
Source: Read Full Article