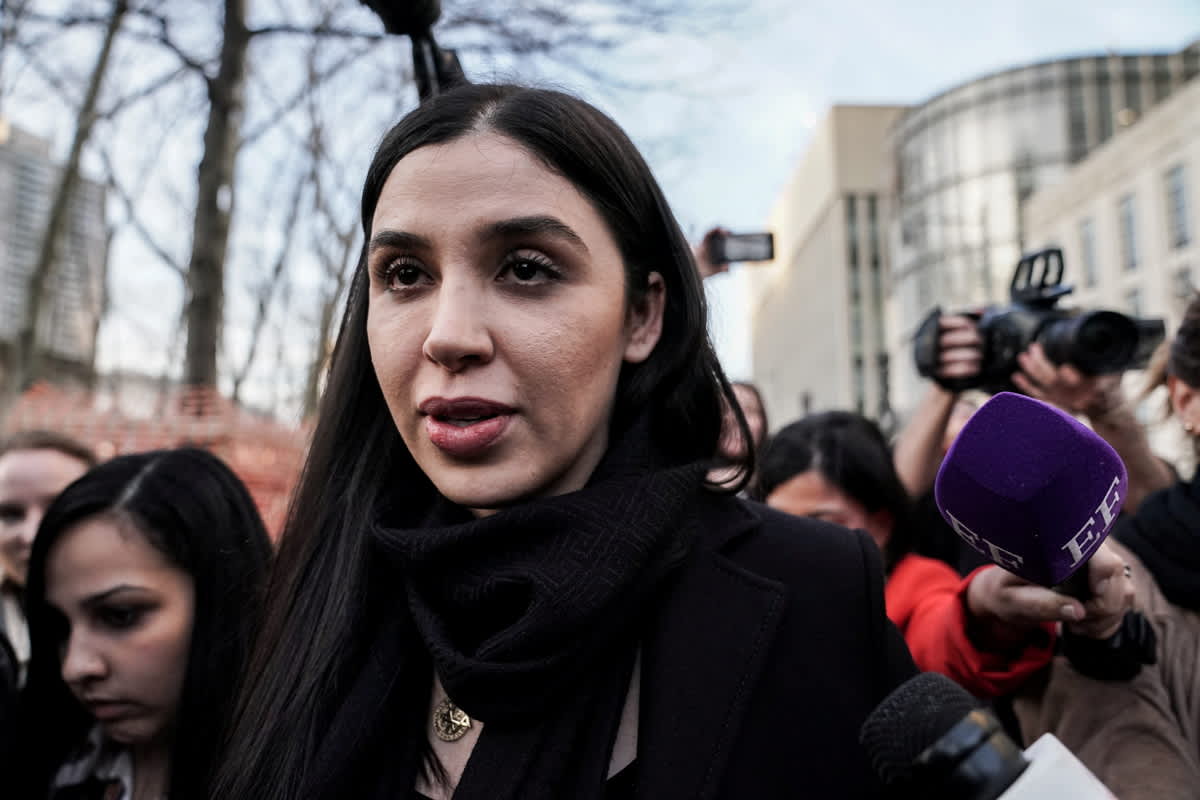 Two years after the conviction and life sentence of Mexican drug lord Joaquin "El Chapo" Guzman, the cartel he once headed appears stronger than ever.

A U.S. Drug Enforcement Administration threat assessment released in March said the Sinaloa cartel remains the most extensive such organization in Mexico and "maintains the widest national influence" in the U.S. The cartel is now heavily involved in trafficking fentanyl and methamphetamines along with cocaine and heroin, the DEA said.

It appears to be proof that the organization is much bigger than one man. But what about one woman?

U.S. authorities reportedly have high hopes for a break in their three-decade war with the cartel following the arrest in February of Emma Coronel Aispuro, El Chapo's wife, and the mother of their twin daughters.

Coronel, 31, is being held without bail on a criminal complaint charging her with conspiracy to distribute narcotics, and with helping El Chapo escape from a Mexican prison in 2014. But language in the 12-page complaint suggests the feds' interest in the former beauty queen, who married El Chapo when she was 19, goes deeper.

"Coronel grew up with knowledge of the narcotics trafficking industry," the complaint says. "Coronel understood the scope of the Sinaloa cartel's drug trafficking."

That scope is massive, U.S. authorities say. The cartel controls drug trafficking in Mexico's most crucial areas — along the Pacific Coast and the northern and southern borders, and is the gatekeeper along the U.S. southwestern border, controlling smuggling routes into California and Arizona. And the organization is as violent at it is ruthless. U.S. prosecutors say the cartel has been known to carry out murders, assassinations and torture just to protect its turf. Some believe Coronel could help break the cycle of violence.

"She knows where all the bodies are buried, so to speak, and she can do a lot of damage to the Sinaloa cartel," former DEA chief of international operations Mike Vigil said in an interview with CNBC's "American Greed."

Vigil, whose six books about the international drug trade include "Afghan Warlord," published last fall, believes Coronel will ultimately cut a deal with U.S. authorities in hopes of protecting her daughters. He said she could do some real damage to the organization.

"She can give a lot of information, the drug routes, the sources of supply for cocaine, corrupt public officials, members of the Sinaloa cartel, things of that nature," Vigil said.

Coronel, who has U.S. and Mexican citizenship and was charged in U.S. District Court for the District of Columbia, has not entered a plea. In March, she waived her right to a preliminary hearing.

"We're working on a possible plea deal," her New York-based attorney, Jeffrey Lichtman, said in an email to "American Greed." "Things may be resolved in the next couple weeks." He did not say whether an agreement might include Coronel's cooperation.

Lichtman has previously called rumors about Coronel's potential cooperation "despicable," warning that they put his client's and her daughters' lives at risk.

In March, Lichtman told NBCUniversal's Telemundo that his client does not have as much information as people think.

"That is a popular belief, but it is based on speculation," Lichtman said, noting that El Chapo has been behind bars for much of the time the couple has been married. "It is not like he has been on the phone telling her secrets from the prison."

Another expert on the drug trade, Mexico City-based journalist Ioan Grillo, told "American Greed" that the Sinaloa cartel is so sprawling and decentralized that even Coronel would not have the secrets authorities would need to bring it down.

"I don't think there's any serious case it would be a major blow," said Grillo, whose latest book, "Blood Gun Money: How America Arms Gangs and Cartels," came out this year.

He said the cartel can easily shift to other routes if its existing supply lines are compromised. And even if she were able to give up corrupt government officials, there are plenty more where they came from.

Vigil believes the cartel may already be making adjustments just in case.

"The Sinaloa cartel is a very resilient cartel," he said.

Still, Lichtman has not taken a deal for his client off the table.

"I think that anyone charged with a federal crime who faces a minimum sentence of 10 years will certainly be open to hearing what the government has to say in terms of a negotiated settlement," he told Telemundo in March.

If Coronel were to flip, she would not be the first Sinaloa insider to do so.

El Chapo's 2019 criminal trial featured no fewer than 14 cooperating witnesses. They included Chicago twins Peter and Jay Flores, top-level traffickers for the organization who kept the drugs flowing to America's heartland, and the money flowing to El Chapo.

"Our husbands were able to maneuver in both the streets of Chicago, all the way up to the mountaintops of Sinaloa. And they were able to navigate both worlds," Olivia told "American Greed."

But the deeper they got into the business, the more complicated life became.

"The more money they made, the more problems they had. Every good moment in our family was always overshadowed by a bad moment," said Mia.

Ultimately, caught in the middle of an internal cartel skirmish, the twins reached out to U.S. prosecutors to cut a deal.

Another insider who turned on El Chapo was Vicente Zambada Niebla, oldest son of the current kingpin of the Sinaloa cartel, Ismael "El Mayo" Zambada.

Vicente Zambada, who is serving a 15-year prison term after pleading guilty to reduced charges, testified against El Chapo while Coronel watched in the courtroom. That has further fueled speculation that Coronel might be willing to turn on the organization.

The fact that the organization seems to barely miss a beat even as its leaders turn on one another shows the folly of U.S. law enforcement's long-running strategy of targeting drug kingpins, Vigil and Grillo told "American Greed."

Grillo said that while it is important not to let drug lords operate with impunity, a better strategy involves taking aim at the stakes in the drug trade.

He said that means more resources to treat drug addiction and to take aim at organized crime and corruption in Mexico.

Vigil agreed, and he said that in his 30 years with the DEA, he never agreed with the emphasis on drug kingpins.

"We here in the United States have to do a better job in terms of reducing the demand for drugs," he said. "Because until we do that, if it's not Mexico, it's going to be in another country."

Disclosure: NBCUniversal is the parent company of CNBC and Telemundo.

See the exclusive, inside story of how two Chicago brothers helped bring down the most notorious drug lord in the world. Watch an ALL NEW episode of "American Greed," Monday, June 7 at 10 p.m. ET/PT only on CNBC.