Marisela Mares, an activist and organizer from Arizona, first got involved in politics in the 2012 Adios Arpaio campaign—when she was just 14 years old. Now, as in, right this very second, she’s one of the nearly 200 Freedom Riders traveling by bus from Phoenix to Washington, D.C. to speak to lawmakers about protecting the right to vote. Over 350 anti-voter bills have been introduced since the 2020 presidential election, including in Arizona where the governor signed a law in May that will limit the distribution of mail ballots, a move that will likely disproportionately impact Black and Latinx voters. For Marisela, joining the UNITE HERE Local 11 Freedom Ride is an opportunity to fight back against voter suppression laws that would have a huge effect on her as a woman of color.

I grew up in Arizona my whole life. When I was much younger, Arizona passed a bill called SB-1070, which is known as the “Show Me Your Papers” law. My entire life, I grew up with this understanding that—as a child of Mexican immigrants—I wasn’t welcome. A lot of my extended family left; my grandfather self-deported, but I stayed. So by the time I got to high school, I had this deep resentment for the people in town. But I learned of this group of students who were volunteering for a movement to get the sheriff out of office and I knew, instantly, this is what I have to do. I had spent so much time being angry and bitter, but that was the first time I felt hopeful that things could be different.

I’ve been an activist in my home state for the past nine years, knocking on doors and getting thousands of people to vote. But it feels like for every time [the progressives] win, Republicans have to cheat and change the rules to take back that control. We won these two Senate seats between 2018 and now and we won the presidency—and now they’re rewriting the laws so that if Arizonians don’t vote in two consecutive elections, they’re taken off the early ballot. 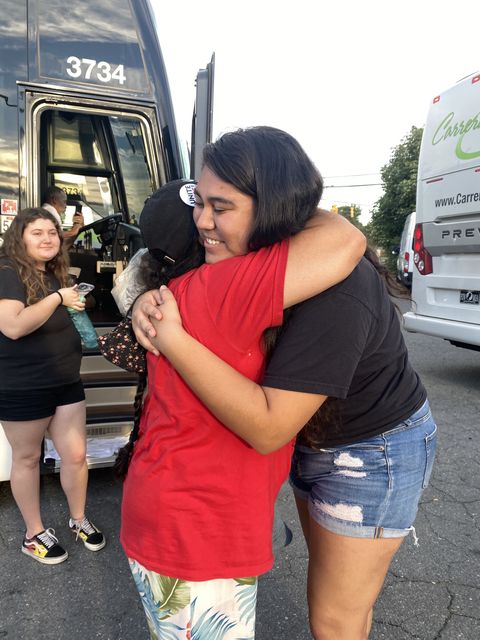 The issue is that oftentimes they make these laws in a way so that the average person won’t even notice. There was no way for someone who doesn’t read the news consistently to know about the law being passed. Voter suppression is very sneaky—we face tactics like changing polling locations or signature issues or something you wouldn’t know unless you go and investigate. It’s set up in a way for people not to notice until it’s too late.

Our entire movement is inspired from the non-violence, civil rights, and labor movement. And it’s a big ask to get on the bus for hours on end and go halfway across the country. It’s a sacrifice we’re willing to make for weeks at a time to share our stories. It’s funny, because [on the bus] we’ve been watching movies about the Freedom Rides and different parts of the civil rights movement and how the fight never ended. Our right to vote is always in jeopardy. And when people ask why the Freedom Ride, I think, What better way to honor that history and take example from previous leaders in the nonviolent struggle in America?

Our right to vote is always in jeopardy.

The ride has been a duality between feeling really inspired but also just carrying a sense of deep grief and sadness. We’ve visited some memorials and landmarks of the civil rights movement. We went to Oklahoma and this year is the 100th anniversary of the Tulsa massacre and we got there on Juneteenth. There was a beautiful festival and I witnessed a community that is driving all these Black-owned businesses and food and art. It was really beautiful. But we had to step back and reflect on the history of white supremacy and just the pure evil and hatred that people have had to go through the past 100 years.

We’re due into D.C. on Thursday night, and we left on June 18, so we’ve been on the bus for 60 hours. Depending on how things go in Washington, we’ll head back to Arizona after June 26.

I think things are headed in a better direction. Like when I first started knocking on doors, people didn’t really believe that we could do anything. And there are still folks who, when I knock on their door, they don’t think that their vote counts or they don’t feel motivated enough to vote. But for the most part, we’ve created this culture of young people who are willing to do anything to make things get better.