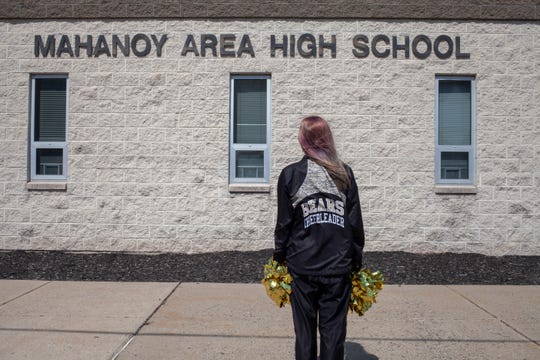 In this photo provided by the American Civil Liberties Union, Brandi Levy wears her former cheerleading outfit while standing outside Mahanoy Area High School in Mahanoy City, Pa., on April 4, 2021. A profanity-laced posting by Levy on Snapchat has ended up before the Supreme Court in the most significant case on student speech in more than 50 years. At issue in arguments to be heard Wednesday, April 28, 2021, via telephone, is whether public schools can discipline students over something they say off-campus. (Danna Singer/ACLU via AP) ORG XMIT: NY853 (Photo: Danna Singer, AP)

We knew this was going to happen.

Meanwhile: Eric Adams, the Brooklyn Borough president and former police captain, is in the lead Wednesday to be New York City’s next mayor, but even though voting is done, the race is far from over.

Plus, the Supreme Court released more opinions today. More on that below.

It’s Mabinty, let’s do this!

Want this news roundup in your inbox every night? Sign up for OnPolitics newsletter here.

The Supreme Court on Wednesday sided with a former cheerleader who excoriated her school in a profanity-laced post on social media, holding that the punishment of her off-campus speech violated the First Amendment.

But the 8-1 ruling left unresolved the broader question of when schools may regulate off-campus speech, and when such punishment is off limits.

When Brandi Levy, who was 14 at the time, failed to make the varsity cheer team in 2017, she and one of her friends posted a vulgar message on Snapchat, exhorting her followers to “F–––– school f–––– softball f–––– cheer f–––– everything.” The message made it back to her coaches, who cut her from the junior varsity squad. After appealing to school authorities, her parents sued the school district in federal court.

Several of the justices said during oral arguments that they were wary of setting a hard-and-fast standard for when schools could regulate off-campus speech, and that hesitancy was reflected in the majority opinion.

“It might be tempting to dismiss (the student’s) words as unworthy of the robust First Amendment protections discussed herein,” Associate Justice Stephen Breyer wrote for the majority. “But sometimes it is necessary to protect the superfluous in order to preserve the necessary.”

That’s not all from SCOTUS: The Supreme Court on Wednesday declined to give police the automatic power to enter homes without a warrant when they’re in “hot pursuit” for a misdemeanor crime, ruling against an officer who charged a man with DUI after slipping under his garage door.

President Joe Biden is launching a crime prevention strategy Wednesday in a push to take on soaring gun violence as Republicans blame the rise in crime on calls from progressive activists to cut police funding.

In a White House speech Wednesday, Biden will announce a “zero tolerance policy” for rogue gun dealers and steps to stop the illegal trafficking of firearms, according to senior administration officials who spoke on the condition of anonymity.

Biden will also emphasize that cities and states can use their portions of $350 billion in direct aid from Biden’s COVID-19 rescue plan, approved by Congress in March, on public safety efforts including hiring more police officers.

Through the first 172 days of 2021, gun violence killed 9,420 Americans, an average of 55 people a day, according to data collected by the Gun Violence Archive, a research nonprofit. The figures include homicides and accidental gun deaths but not suicides.