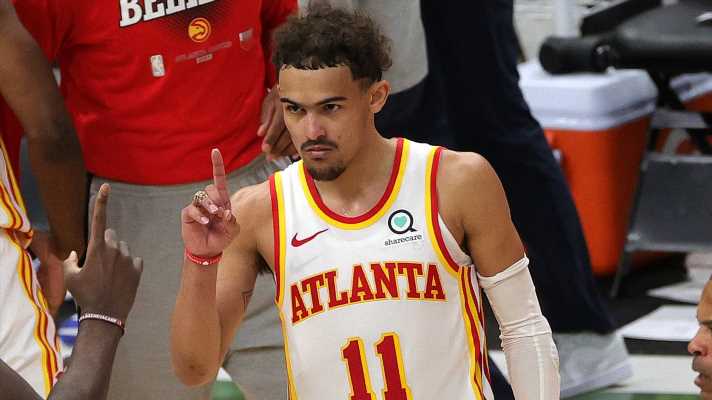 MILWAUKEE — Steph Curry has mastered the shimmy after a made shot.

Atlanta’s Trae Young took the shimmy to the next level by doing it before a made 3-pointer.

Nearing the end of the third quarter Wednesday, Young crossed up Jrue Holiday and found himself so wide open for a 3-pointer that he paused, surveyed the scene, did a little shoulder shimmy and left it fly. Count it.

It was part of his special 48-point, 11-assist performance in the Hawks’ 116-113 victory over the Milwaukee Bucks in Game 1 of the Eastern Conference finals.

Young is the second-youngest player in NBA history to have at least 45 points and 10 assists in a playoff game behind Dallas’ Luka Doncic — yet another connection between the best players of an excellent 2018 draft class who were essentially traded for each other.

SportsPulse: Jim Owczarski of the Milwaukee Journal Sentinel breaks down the Bucks' defensive game plan against the Hawks' Trae Young in the Eastern Conference finals.

McMillan said Young is built for this moment. Then-Dallas coach Rick Carlisle said the same thing about Doncic, who hasn’t made it out of the first round. But what they mean is that they aren’t afraid of the moment.

"He's a young player, so there's a lot more room for growth for Trae," McMillan said. "This is his first time in the playoffs, and as I was basically working with him during the season, I really felt he was built for this time of the season. He's a fearless player. He's a confident player. He's a kid that every second that he's on the floor, he's giving it to you. He's giving everything that he has.

"I really feel that his game, his style of play, is really built for this time of the season."

McMillan, the former point guard, has spent a lot of time with Young this season. "I've been in his position before," McMillan said. "I certainly don't have the talent that he has (long pause for effect) on the offensive end of the floor."

"When you have a coach that believes in you and then you've got great teammates around you that make plays and also believe in you, it makes my job a lot easier," Young said. "I just go out there, I have fun, enjoy the game and just try and leave it at that. Then whatever happens, happens. It's been fun."