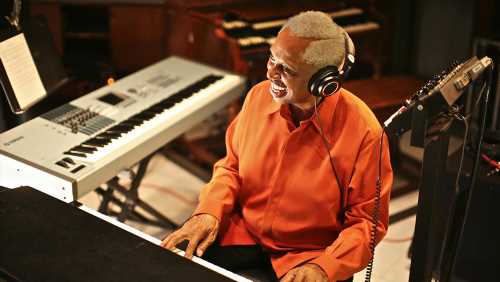 Clarence “Mac” McDonald, a keyboardist who played with such legends as Ray Charles, Aretha Franklin and Ella Fitzgerald and produced the Emotions’ No. 1 smash “Best of My Love” and many others, has died. He was 76.

During a career that spanned more than half a century, McDonald was a frequent producing collaborator with Earth, Wind & Fire’s Maurice White. He played keyboards on records by such stars as the Jackson 5, Barbra Streisand, Hall & Oates, James Taylor, The Temptations, Al Wilson, Tina Turner, Linda Ronstadt and Justin Timberlake, along with Charles, Franklin and Fitzgerald.

He also played keyboards on “Movin’ on Up,” the theme song from TV’s The Jeffersons, and was the only credited musician on Cheech and Chong’s 1972 sophomore LP Big Bambu.

“The thing that always remained consistent was the standard of excellence provided by Clarence McDonald,” said Sonny Burke, who was musical director for and collaborated with Smokey Robinson for 35 years.

As a producer, McDonald’s album credits include Bill Withers’ Menagerie and its memorable 1977 hit single “Lovely Day”; Deniece Williams’ 1976 debut This Is Niecy; and the Emotions’ Rejoice, which spawned the Grammy-winning “Best of My Love.”

McDonald also is credited as a co-writer on Monica’s 2010 hit “Everything to Me,” which spent seven weeks at No. 1 on the Billboard R&B chart and sampled Williams’ 1981 song “Silly,” which McDonald co-wrote.

Along with “Best of My Love,” McDonald played on the No. 1 pop hits including Billy Preston’s “Will It Go Round in Circles” and “Nothing from Nothing” and Al Wilson’s “Show and Tell.” He also worked on the Jackson 5’s 1974 smash “Dancing Machine,” which topped Billboard’s soul chart and peaked at No. 2 on the Hot 100.

He also collaborated on Charles’ final studio disc Genius Loves Company, arranging and playing keyboards on “Heaven Help Us All,” the Grammy-winning duet with Gladys Knight. He shared a piano bench with Charles on that record, which was released two months after the Rock and Roll Hall of Famer’s death in August 2004.

Born on February 24, 1945, in Los Angeles, McDonald already was a working musician when he served in the Army during the Vietnam War. One of his earliest gigs was as musical director and keyboardist for the Vocals, a Los Angeles group featuring future hitmaking 5th Dimension stars Marilyn McCoo and Billy Davis Jr. The group toured with Charles in the mid-1960s.

“Producing fusion albums at RCA in the 1970s, I first had the fine pleasure of working with and getting to know Clarence McDonald, a very adept session keyboard player and arranger,” jazz pianist and producer Mike Lipskin said. “We were close friends for the next 45 years, allowing me to appreciate his warmth, musicality and deep intelligence. This is a profound loss for me and music.”