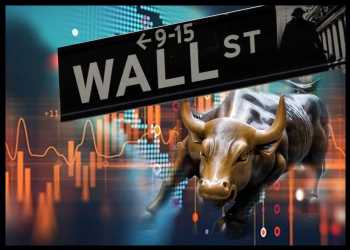 Stocks showed a strong move to the upside over the course of the trading day on Wednesday, extending the substantial rebound seen in the previous session. With the continued upward move, the major averages more than offset the sell-off seen on Monday.

The continued strength on Wall Street partly reflected a positive reaction to the latest batch of earnings news from several big-name companies.

Dow components Coca-Cola (KO) and Verizon (VZ) moved to the upside after reporting better than expected quarterly results and raising their full-year guidance.

On the other hand, shares of Netflix (NFLX) fell sharply after the streaming giant reported weaker than expected second quarter earnings and forecast subscriber growth in the current quarter below analyst estimates.

Energy stocks moved sharply higher on the day as the price of crude oil continued to recover from the steep drop seen on Monday.

Crude for August delivery spiked $3.10 to $70.30 despite the release of a report showing an unexpected weekly increase in crude oil inventories.

Reflecting the strength in the energy sector, the Philadelphia Oil Service Index skyrocketed by 4.8 percent and the NYSE Arca Oil Index surged up by 3.8 percent.

Significant strength was also visible among airline stocks, as reflected by the 3.2 percent jump by the NYSE Arca Airline Index. The index continued to rebound after ending Monday’s trading at a five-month closing low.

Semiconductor stocks also turned in a particularly strong performance on the day, driving the Philadelphia Semiconductor Index up by 3.1 percent.

Steel, natural gas and financial stocks also saw considerable strength on the day, while utilities stocks were among the few sectors to buck the uptrend.

In overseas trading, stock markets across the Asia-Pacific region turned in a mixed performance during trading on Wednesday. Japan’s Nikkei 225 Index climbed by 0.6 percent, while Hong Kong’s Hang Seng Index edged down by 0.1 percent.

Meanwhile, the major European markets all showed strong moves upside on the day. While the German DAX Index jumped by 1.4 percent, the U.K.’s FTSE 100 Index and the French CAC 40 Index surged up by 1.7 percent and 1.9 percent, respectively.

In the bond market, treasuries extended the pullback seen over the course of the previous session. As a result, the yield on the benchmark ten-year note, which moves opposite of its price, advanced 7.1 basis points to 1.208 percent.

Following a quiet day on the U.S. economic front, trading on Thursday may be impacted by reaction to reports on weekly jobless claims, existing home sales and leading economic indicators.