Gov. Andrew Cuomo didn’t show up at work on Wednesday but instead remained holed up in the Governor’s Mansion developing a strategy to salvage his political career, sources told The Post.

The embattled Democrat met with close allies in Albany’s Executive Mansion and remained tight-lipped on findings by independent investigators that he sexually harassed 11 women in the workplace, according to the sources.

“Mr. Cuomo spent Wednesday at the Executive Mansion in Albany talking with his closest advisers preparing for a public event that would further respond to the charges,” according to several people familiar with the matter.

“The event never happened because the governor’s team couldn’t settle on an exact message or format,” the sources told The Post.

Cuomo has not been seen in public or made a statement since Attorney General Letitia James released the 165-page bombshell report Tuesday morning, instead opting to release a pre-recorded video denying the accusations, as a bipartisan chorus of calls for his resignation grew deafening. 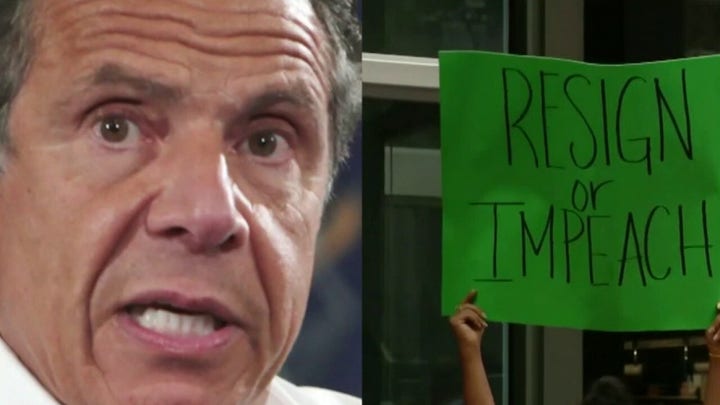 The governor’s silence comes as separate criminal investigations into the report’s allegations of forcible touching were launched in Nassau County, Manhattan, Westchester County and Albany.

A wide-ranging impeachment inquiry in the Democratic-led state Assembly is said to have broad support among state legislators, the majority of whom have called for Cuomo to read the writing on the wall.

Cuomo’s Wednesday hideout — the mansion where he once lived with his father Gov. Mario Cuomo — was the site of the report’s most serious accusation.

“I mean it was — he was like cupping my breast. He cupped my breast,” an unidentified female aide said in sworn testimony to investigators.