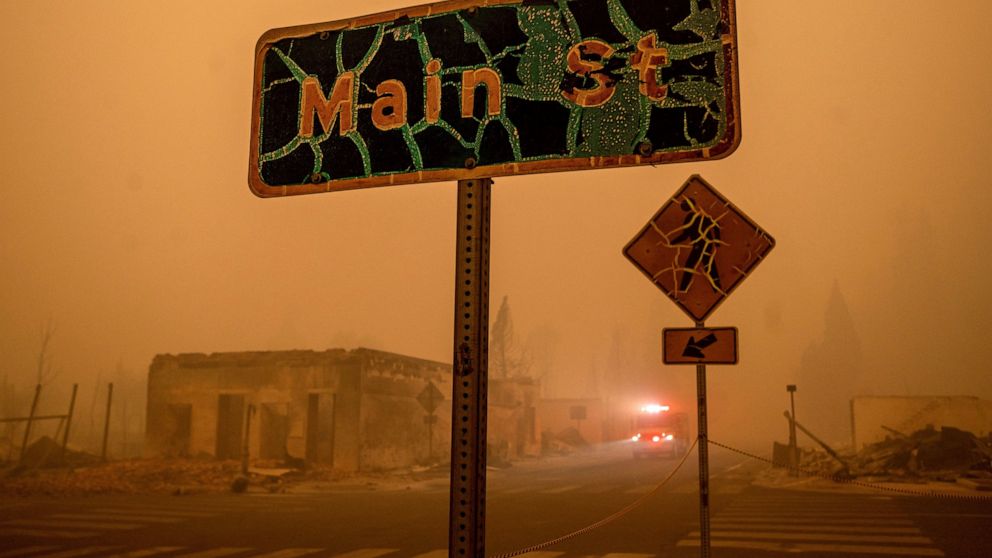 Thick smoke that held down winds and temperatures began to clear Sunday from the scenic forestlands of Northern California as firefighters battling the largest single wildfire in state history braced for a return of fire-friendly weather.

The winds weren’t expected to reach the ferocious speeds that helped the Dixie Fire explode in size last week. But they were nonetheless concerning for firefighters working in unprecedented conditions to protect thousands of threatened homes.

“The live trees that are out there now have a lower fuel moisture than you would find when you go to a hardware store or a lumber yard and get that piece of lumber that’s kiln dried,” Mark Brunton, operations section chief for the California Department of Forestry and Fire Protection, said in an online briefing Sunday morning. “It’s that dry, so it doesn’t take much for any sort of embers, sparks or small flaming front to get that going.”

Fueled by strong winds and bone-dry vegetation, the fire incinerated much of Greenville on Wednesday and Thursday, destroying 370 homes and structures and threatening nearly 14,000 buildings in the northern Sierra Nevada.

The Dixie Fire, named for the road where it started nearly four weeks ago, grew to an area of 765 square miles (1,980 square kilometers) by Sunday evening and was just 21% contained, according to the California Department of Forestry and Fire Protection. It had scorched an area more than twice the size of New York City.

With smoke clearing out on eastern portions of the fire, crews that had been directly attacking the front lines would be forced to retreat and build containment lines farther back, said Dan McKeague, a fire information officer from the U.S. Forest Service. On the plus side, better visibility should allow planes and helicopters to return to the firefight and make it safer for ground crews to maneuver.

“As soon as that air clears, we can fly again,” McKeague said.

Crews have constructed 465 miles (748 kilometers) of line around the massive blaze, Deputy Incident Commander Chris Waters said. That’s about the distance from the central California city of Chico to Los Angeles. But officials are only confident that about 20% of the line is secure, he said.

“Every bit of that line needs to be constructed, staffed, mopped up and actually put to bed before we can call this fire fully contained,” Waters said during Saturday evening’s incident briefing.

Strong winds contributed to increased fire activity Sunday. But the weather was expected to settle a bit starting Monday.

Damage reports are preliminary because assessment teams can’t get into many areas, officials said.

The blaze became the largest single fire in California’s recorded history, surpassing last year’s Creek Fire in the Central Valley. It’s about half the size of the August Complex, a series of lightning-caused 2020 fires across seven counties that were fought together and that state officials consider California’s largest wildfire overall.

The fire’s cause was under investigation. The Pacific Gas & Electric utility has said it may have been sparked when a tree fell on one of its power lines. A federal judge ordered PG&E on Friday to give details by Aug. 16 about the equipment and vegetation where the fire started.

Cooler temperatures and higher humidity slowed the spread of the fire, and temperatures topped 90 degrees Fahrenheit (32 degrees Celsius) instead of the triple-digit highs recorded earlier in the week.

But the blaze and its neighboring fires, within several hundred miles of each other, posed an ongoing threat.

Gov. Gavin Newsom surveyed the damage in Greenville Saturday, writing on Twitter that “our hearts ache for this town.”

“These are climate-induced wildfires and we have to acknowledge that we have the capacity in not just the state but in this country to solve this,” Newsom said on CNN.

Heat waves and historic drought tied to climate change have made wildfires harder to fight in the American West. Scientists have said climate change has made the region much warmer and drier in the past 30 years and will continue to make the weather more extreme and wildfires more frequent and destructive.

South of the Dixie Fire, firefighters prevented further growth of the River Fire, which broke out Wednesday near Colfax and destroyed 68 homes.

Smoke from wildfires burning in the U.S. West continues to flow into parts of Colorado and Utah, where the air quality in many areas was rated as unhealthy. Denver’s air quality Sunday was relatively better than Saturday, but the smoke has made the air there and in Salt Lake City among the worst in the world.

California’s fire season is on track to surpass last year’s season, which was the worst fire season in recent recorded state history.

Since the start of the year, more than 6,000 blazes have destroyed more than 1,260 square miles (3,260 square kilometers) of land — more than triple the losses for the same period in 2020, according to state fire figures.

California’s raging wildfires were among 107 large fires burning across 14 states, mostly in the West, where historic drought conditions have left lands parched and ripe for ignition.