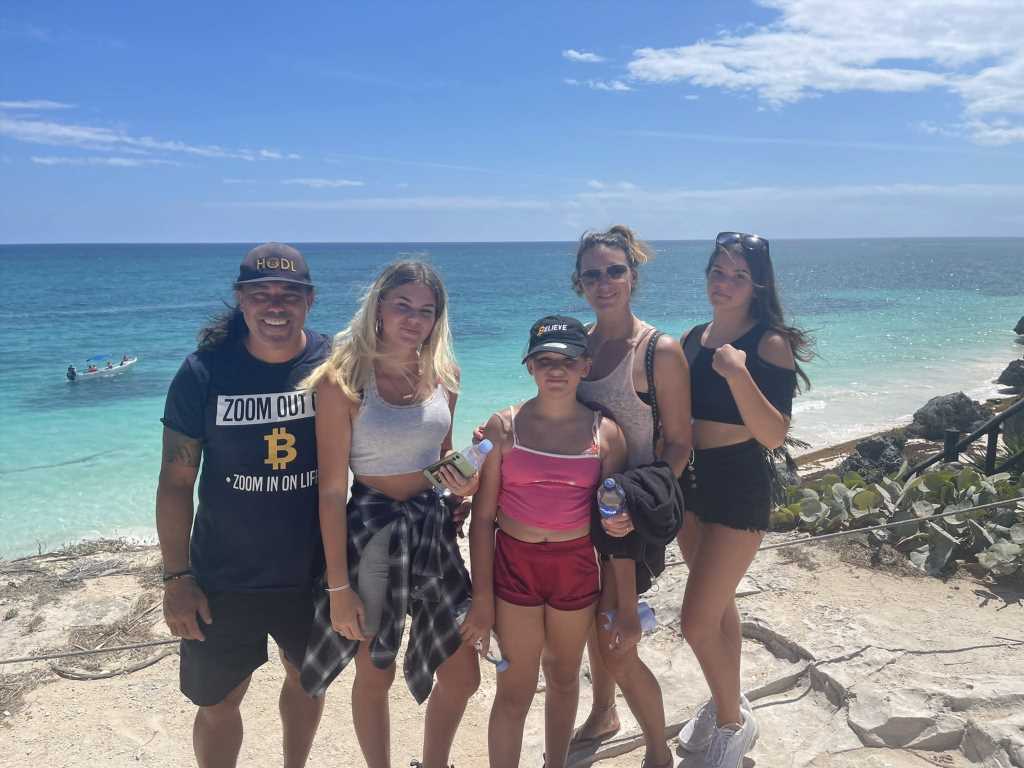 Didi Taihuttu, his wife, and three kids liquidated all of their assets and bought bitcoin in 2017, back when it was trading at around $900. Now, the Dutch family of five is safeguarding most of their crypto fortune in secret vaults on four different continents.

"I have hidden the hardware wallets across several countries so that I never have to fly very far if I need to access my cold wallet, in order to jump out of the market," explained Taihuttu, patriarch of the so-called Bitcoin Family.

Taihuttu has two hiding spots in Europe, another two in Asia, one in South America, and a sixth in Australia.

We aren't talking buried treasure – none of the sites are below ground or on a remote island – but the family told CNBC the crypto stashes are hidden in different ways and in a variety of locations, ranging from rental apartments and friends' homes to self-storage sites.

"I prefer to live in a decentralized world where I have the responsibility to protect my capital," said Taihuttu.

There are a lot of ways to store crypto coins. Online exchanges like Coinbase and PayPal will custody tokens for users, while the more tech-savvy may opt to cut out the middleman and hold their crypto cash on personally-owned hardware wallets.

Thumb drive-size devices like a Trezor or Ledger offer a way to secure crypto tokens. Square is also building a hardware wallet and service "to make bitcoin custody more mainstream."

People who choose to hold their own cryptocurrency can store it "hot," "cold," or some combination of the two. A hot wallet is connected to the internet and allows owners relatively easy access to their coins so that they can access and spend their crypto. The trade-off for convenience is potential exposure to bad actors.

"Cold storage often refers to crypto that has been moved to wallets whose private keys – the passwords that enable the crypto to be moved out of the wallet – are not stored on internet-connected computers, so that hackers can't hack into the computer and steal the private keys," explained Philip Gradwell, chief economist of Chainalysis, a blockchain data firm.

Gradwell says exchanges will also often use cold wallets to secure the crypto their customers have deposited.

A recent Chainalysis report examining wallets holding bitcoin shows that 11.8 million bitcoin is in the hands of long-term investors, 3.7 million is lost, another 3.2 million is circulating among traders, and the remaining 2.4 million have yet to be mined.

"We can guess which wallets are cold storage – as they have particular behaviors, like receiving large amounts of crypto from a single source and not sending any for a long time until they are emptied all in one go – but you cannot definitively tell that a wallet is being used as cold storage," explained Gradwell.

In the case of the Taihuttu family, 26% of Didi's crypto holdings are "hot." He refers to this crypto stash as his "risk capital." He uses these crypto coins for day trading and potentially precarious bets, like when he sold his dogecoin for a profit and then bought it back when the price of DOGE bottomed out.

The other 74% of Taihuttu's total crypto portfolio is in cold storage. These cold hardware wallets, which are spread around the globe, include bitcoin, ethereum, and some litecoin. The family declined to say how much it holds in crypto.

Bitcoin, ethereum, and litecoin are all in the midst of yet another climb higher, up 57%, 83%, and 61%, respectively, in the last three weeks.

Moving bitcoin to cold storage isn't a new idea. For as long as there's been bitcoin, there's been a way to store it cold. But it requires more upkeep.

"Cold storage requires a lot more permissioning in order to access it, whether it be in a bank vault or whether it be buried in the Andes mountains," said Van Phu, a software engineer with crypto fintech startup Floating Point Group.

And while Taihuttu says it's easy to top up the addresses of these cold storage wallets with fresh crypto coins, retrieving them is a different story. Drawing down on his cold crypto requires physically flying to his many hiding spots.

Taihuttu is trying to put a crypto cold wallet on every continent so it's easier to access his holdings.

Buried in the Swiss Alps is a vault inside a decommissioned military bunker that's cut off from the internet, guarded by an onsite security team, and apparently, according to digital bank Xapo's website, "watched over in the skies by satellite." The precious merchandise under lock and guard is bitcoin.

Coinbase bought Xapo in 2019, an unsurprising move for a company that stores 98% of customer funds offline, in order to provide "an important security measure against theft or loss."

While centralized vaults like these offer certain security protections, Taihuttu says it feels too centralized to him.

"If you want to store your coins truly outside of the reach of the state, you can just hold those private keys directly. That's the equivalent of burying a bar of gold in your backyard," said Castle Island Ventures general partner and Coin Metrics co-founder Nic Carter.

That's why Taihuttu doesn't use banks or post offices. "I find it just too risky," he said. "What happens when one of these companies goes bankrupt? Where are my bitcoins? Will I have access? You again put the trust of your capital in the hands of a centralized organization."

"They have beautiful setups for inheritance," he said. "When you die, these companies handle that, as well, and I really believe they are doing a great job."

Phu says multi-party computation, or MPC, is also proving instrumental in the digital asset space. In this custodial arrangement, multiple parties all have to give consent in order for a transaction to go through.

This avoids the risk of storing private keys and authentication credentials in one single place, something known as a "single point of compromise." MPC instead breaks up the private key into shares, encrypts it, and then divides that among multiple parties, according to Fireblocks, a digital asset infrastructure provider.

"I think the evolution right now is to MPC," said Phu.