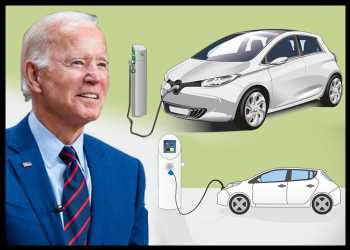 President Joe Biden will sign an executive order Thursday that sets a target of 50 percent electric vehicle sales share in the U.S. automobile market by 2030.

Also, at 3 PM ET, the President will announce a set of new actions aimed at advancing smart fuel efficiency and emission standards in the country, and increasing the impact of his proposed Build Back Better investments.

The actions that his Administration is taking to strengthen American leadership on clean cars and trucks will drive the electric vehicle future forward, outcompete China, and tackle the climate crisis, the White House said.

The Executive Order will set an ambitious target to make half of all new vehicles sold in 2030 zero-emissions vehicles, including battery electric, plug-in hybrid electric, or fuel cell electric vehicles.

The White House said that the Environmental Protection Agency (EPA) and U.S. Department of Transportation (USDOT) will announce smart fuel efficiency and emissions standards. That is expected to deliver around $140 billion in net benefits over the life of the program, save about 200 billion gallons of gasoline, and reduce around two billion metric tons of carbon pollution. For the average consumer, this means net benefits of up to $900 over the life of the vehicle in fuel savings.

The President will sign the order in the presence of top executives from American automobile giants Ford, GM, and Stellantis and the United Auto Workers (UAW).

Ahead of the signing ceremony, Ford, GM, and Stellantis issued a joint statement announcing their shared aspiration to achieve sales of 40-50 percent of annual U.S. volumes of electric vehicles by 2030 in order to move the nation closer to a zero-emissions future consistent with Paris climate goals.

They called on the Government to timely deploy the full suite of electrification policies committed to by the Administration in the Build Back Better Plan, including purchase incentives, a comprehensive charging network of sufficient density to support the millions of vehicles these targets represent, investments in R&D, and incentives to expand the electric vehicle manufacturing and supply chains in the United States.

The automakers promised to work with the Biden Administration, Congress and state and local governments to enact policies that will enable these objectives.

UAW President Ray Curry said in a statement that any auto industry transition to alternative fueled engines must be paired with passage of the Stabenow Amendment and passage or an agreement to adhere to the policies of the PRO Act to ensure these jobs of the future will protect UAW members, their families, and the American middle class. He urged the Senate to pass the PRO Act.

The Alliance for Automotive Innovation President and CEO John Bozzella said auto manufacturers are committed to a net-zero carbon transportation future. “We look forward to working with the Administration as we evaluate EPA’s proposed changes to light-duty vehicle standards for Model Years 2023-2026,” he added.