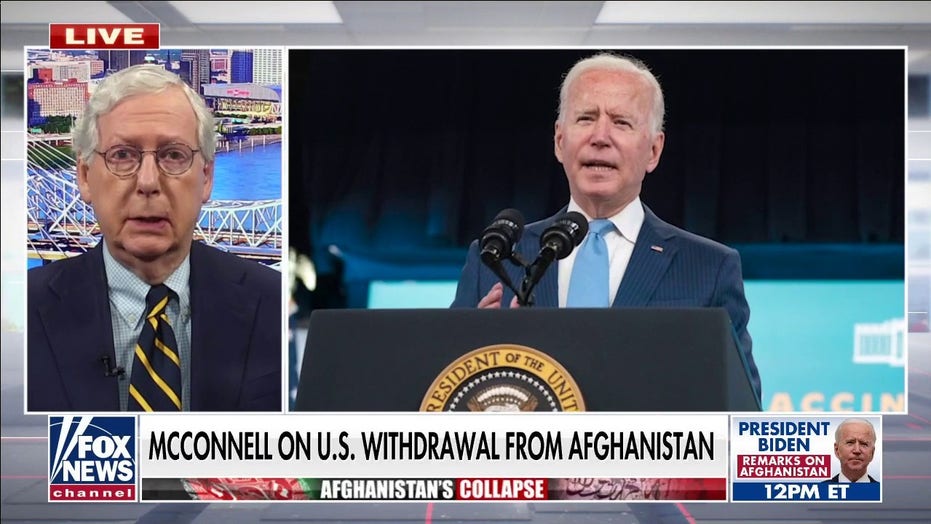 McConnell on US withdrawal from Afghanistan

Senate Minority Leader Mitch McConnell joins ‘America’s Newsroom’ to discuss the chaos in Afghanistan and how it may threaten to derail Biden’s agenda.

Vice President Kamala Harris gave credit to President Biden for deciding to end the war in Afghanistan, even though members of the administration – including Biden himself – have blamed former President Trump for agreeing to withdraw U.S. troops.

As the U.S. has been scrambling to evacuate Americans and allies out of Afghanistan in the aftermath of the Taliban’s takeover of the country, Harris portrayed the situation as the result of correct decision-making by the current administration without mentioning the Taliban’s swift victory.

“Months ago, President Joe Biden made the courageous and right decision to end this war because we had achieved what we went there to do,” Harris said in a speech delivered in Singapore on Monday. She went on to say the U.S. is “laser-focused on the task at hand,” which she described as an “historic airlift happen[ing] in an incredibly difficult and dangerous environment.”

The positivity was in stark contrast to past comments in which the administration blamed Trump for forcing Biden into the withdrawal by making an agreement with the Taliban.

“When I came into office I inherited a deal that President Trump negotiated with the Taliban,” Biden said Aug. 16, saying that his choice was to either honor that agreement or fight.

The previous day, Secretary of State Antony Blinken also blamed Trump during an appearance on NBC’s “Meet the Press.”

“We inherited a deadline negotiated by the previous administration. That deadline was May 1, and the idea that we could have maintained the status quo beyond May 1 if the president had decided to stay, I think is a fiction,” Blinken said. The secretary went on to say that if Biden had chosen to remain in Afghanistan, “all gloves would have been off” and the U.S. “would have been back at war, with the Taliban attacking our forces.”

The finger-pointing at Trump did not end there. Last Tuesday, in response to being asked about a report that one of the Taliban negotiators had been released from Guantanamo Bay in a prisoner swap when Biden was vice president, White House press secretary Jen Psaki shifted to Trump.

“In prior negotiations and commitments made during the Trump administration there were thousands of individuals who were released,” Psaki said.

Harris’ insistence that the withdrawal was the right move while officials also blame Trump for the situation is emblematic of the administration’s messaging on Afghanistan. Biden himself has taken both positions. While he has pointed to Trump’s deal as impacting the choice he had to make, he also told ABC’s George Stephanopoulos that he would have taken similar action even without Trump’s agreement.

“I would have tried to figure out how to withdraw those troops,” Biden said.