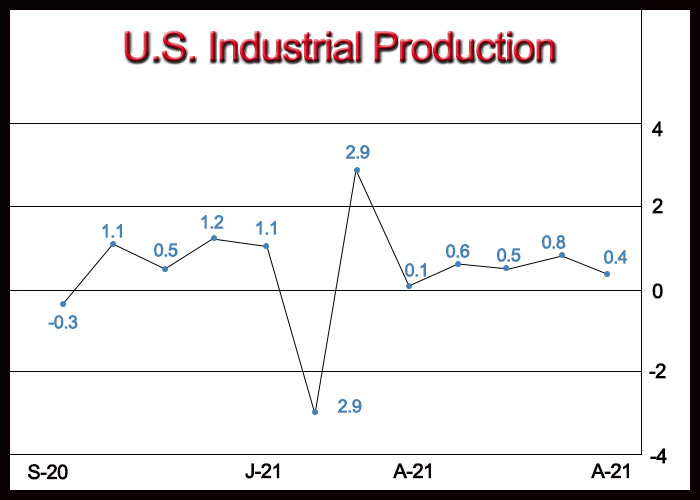 A report released by the Federal Reserve on Wednesday showed industrial production in the U.S. increased by slightly less than expected in the month of August.

The report said industrial production rose by 0.4 percent in August after climbing by a downwardly revised 0.8 percent in July.

Economists had expected industrial production to increase by 0.5 percent compared to the 0.9 percent advance originally reported for the previous month.

The Fed noted late-month shutdowns related to Hurricane Ida held down the gain in industrial production by an estimated 0.3 percentage points.

Andrew Hunter, Senior U.S. Economist at Capital Economics, said the slowdown in the pace of growth in industrial production in August suggests that the industrial recovery is losing steam.

While the hurricane forced plant closures for petrochemicals, plastic resins, and petroleum refining, overall manufacturing output still edged up by 0.2 percent in August after spiking by 1.6 percent in July.

The report also showed a substantial rebound in utilities output, which soared by 3.3 percent in August after plunging by 4.0 percent in July, as unseasonably warm temperatures boosted demand for air conditioning.

Meanwhile, mining output fell by 0.6 percent in August after jumping by 1.0 percent in July, reflecting hurricane-induced disruptions to oil and gas extraction in the Gulf of Mexico.

The Fed also said capacity utilization for the industrial sector edged up to 76.4 percent in August from 76.2 in July. The uptick matched economist estimates.