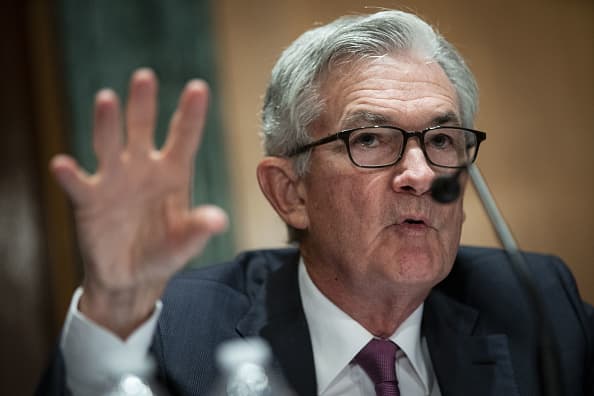 The Federal Reserve's much-anticipated meeting next week may not be quite as exciting for markets as some investors had been expecting in the usual choppy month of September.

The meeting is the highlight of the coming week, traditionally a negative time for stocks. Stocks were slightly lower in the past week, with the exception of the small-cap Russell 2000, which ended the week up 0.4%.

Central bank officials begin meeting Tuesday, and end their two-day session with an announcement Wednesday afternoon. That will be followed by a press briefing with Fed Chairman Jerome Powell.

The economic calendar is light, and there is mostly housing data. Starts and permits data are slated for Tuesday, existing home sales numbers are set for Wednesday, with new home sales figures coming out Friday. A handful of companies are reporting earnings, including Costco Wholesale, FedEx and Nike.

The Fed's meeting may not be as eventful as investors once expected. The central bank's move away from its bond-buying program has been expected by some strategists to cause turbulence for stocks. But the Fed is likely to only discuss tapering at the upcoming meeting and, at most, signal it could slow the bond purchases later in the year.

"They've been very clear in my view on the guidance on tapering. I think they get an 'A plus' on communicating their intentions around the balance sheet," Bank of America head of U.S. economics Michelle Meyer said. "They said they want to take baby steps and they have." She expects an announcement in November and the actual cut in bond purchases to start before year-end.

The unwinding of the $120 billion a month bond buying program is important since it would be the first major move away from the extraordinary policies the Fed used to fight the pandemic. It also takes the Fed a step closer to interest rate hikes.

"Everybody's been calling for a correction, and it's always hard to see what the catalyst could be. The catalysts for a correction right now are as clear as they've been all year long," Morgan Stanley Investment Management head of global macro strategy Jim Caron said.

For now, Caron sees the Fed's communications in the week ahead as less of a risk for markets than other simmering issues, like the debt ceiling, the potential for more taxes and uncertainty surrounding the White House's infrastructure bill.

Congress has until sometime in October to extend the debt ceiling before the government runs out of funds and defaults. Political rhetoric around raising the debt limit, which would allow Treasury to issue more debt, has been building. The White House warned Friday the economy could enter a recession if Congress fails to act.

"I think the Fed wants to stay out of the fight at this point. There's just too much ambiguity," Caron said. "They're not going to announce tapering. Their statement is going to be carefully worded. The bar is really high for them to say anything hawkish right now. Between now and the next meeting, we should have a pretty good idea about the debt ceiling and where the infrastructure stands."

What the Fed could do

The odds for a September tapering announcement from the Fed fell sharply after August's softer than expected employment report showed just 235,000 jobs were created, about 500,000 less than expected.

Economists now mostly expect a November announcement, but the September meeting could be important for what else the Fed says.

The quarterly forecasts of Fed officials are released along with the 2 p.m. statement Wednesday. They include new economic projections and an updated interest rate forecast.

"I don't think they want to say anything that's slightly hawkish, but the dot plot could come out that way," Caron said. The so-called dot plot is the Fed's interest rate forecast, which is the anonymous interest rate targets of Fed officials presented in a chart format.

Some Fed watchers expect the central bank to move its interest rate forecast forward slightly. In June, the dot plot showed two rate hikes for 2023 and none for 2022.

"They are two Fed officials from having a half a hike and they are three Fed officials from getting a full hike penciled in" for 2022, Bank of America's Meyer said. "I think the dots will show the first hike is in 2023, but it is possible that shifts. … I think if it shifts, the problem the Fed will have is to communicate the difference."

Meyer said Powell has emphasized the asset purchase program's unwinding is not linked to the Fed's move to raise interest rates from the current near-zero level. If the interest rate forecast moves forward, it could suggest to the market that the Fed will wind down its bond program and immediately move on to a rate hike. The bond program is slowly expected to be unwound over the course of six months or more.

September as a whole has been weak for the stock market, with the S&P 500 down just under 2%.

J.P. Morgan technical strategists, however, do not see the big downdraft expected by some analysts.

"As a base-case view, we believe the index holds that support and rallies in the fourth quarter. Even if the market breaks support and sees a near-term increase in realized volatility, we continue to think the 4238-4257 summer-time breakout area will put a floor under the index," the strategists wrote.

Investors continue to watch for earnings warnings ahead of the third-quarter reporting season, which starts in mid-October. The concern is that supply chain risks will continue to crimp revenues and could hurt margins.

There are a few companies reporting in the week ahead, and they should comment on supply chains and rising costs. FedEx reports Tuesday; General Mills releases earnings Wednesday, and both Nike and Costco report Thursday.

Nike is being watched closely since it is expected that supply chain issues will hurt its profits and it could continue to have issues getting products to sell.