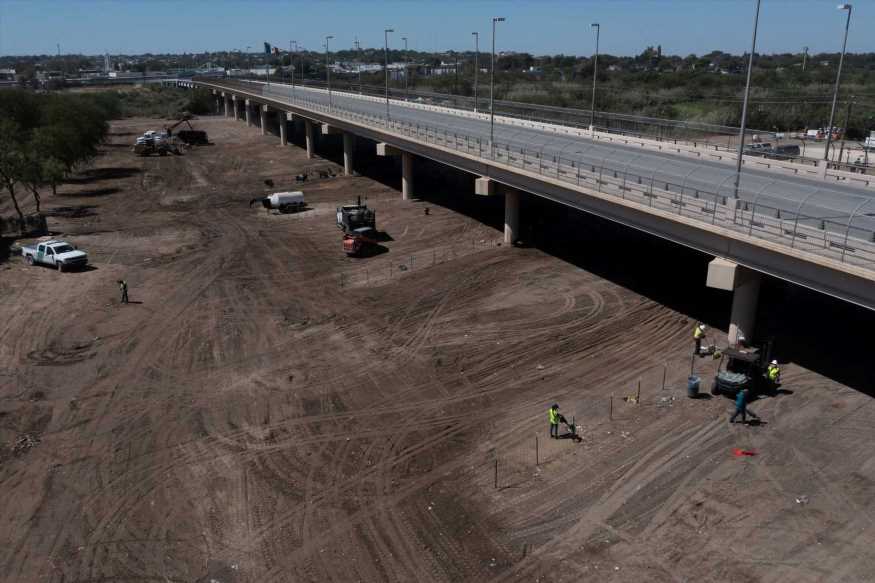 No migrants remain at a border camp under a bridge in Del Rio, Texas, where thousands, most of them Haitian nationals, had gathered in recent days, Department of Homeland Security Secretary Alejandro Mayorkas said at a White House press briefing Friday.

The announcement comes as the Biden administration faces widespread criticism for its handling of an increase in migration at the U.S.-Mexico border.

U.S. authorities have encountered nearly 30,000 migrants in Del Rio since Sept. 9, according to Mayorkas. At one point, 15,000 migrants, predominantly Haitians, were camped out under the bridge connecting Del Rio with Ciudad Acuna, Mexico. Yesterday, the administration announced that there were fewer than 5,000 people remaining at the camp.

"As of this morning, there are no longer any migrants in the camp underneath the Del Rio International Bridge," Mayorkas said at the White House.

Approximately 2,000 Haitian nationals have been taken back to Haiti on 17 repatriation flights organized by the DHS, according to Mayorkas.

An estimated 8,000 returned to Mexico voluntarily and more than 5,000 are being processed by the DHS to determine if they should be placed in immigration removal proceedings or expelled through a public health law known as Title 42, Mayorkas said.

Approximately 12,400 migrants will eventually have their cases heard by an immigration judge who will determine whether they will be deported or remain in the U.S., he added.

Title 42, first implemented by former President Donald Trump at the outset of the pandemic, denies certain migrants the opportunity to apply for asylum. Mayorkas defended the Biden administration's use of the policy to send Haitian nationals back to Haiti.

"We are doing this out of a public health need. It is not an immigration policy," Mayorkas said, noting that Title 42 is not specific to Haitian migrants. The Centers for Disease Control and Prevention decided in August that Title 42 would remain in place until it determines that there is no longer a danger of Covid-19 being brought across the border into the U.S.

Mayorkas also condemned the scenes in numerous photos and video depicting Border Patrol agents on horseback grabbing Haitian migrants trying to cross into the U.S., which led the Biden administration to halt agents' use of horses in Del Rio on Thursday.

"Those images painfully conjured up the worst elements of our nation's ongoing battle against systemic racism," Mayorkas said, adding that they "raised serious questions about what occurred."

The DHS has launched an investigation into the events that were captured in the photos and video, Mayorkas said. The agents involved have been assigned to administrative duties and are not interacting with migrants while the investigation is being conducted, he added.

Earlier Friday, President Joe Biden slammed the Border Patrol agents for their treatment of the Haitian migrants in Del Rio, vowing they will face consequences for their actions.

"It's horrible what you saw. To see people like they did, with horses, running them over, people being strapped, it's outrageous," Biden said at the White House.

"I promise you, those people will pay. There is an investigation underway right now, and there will be consequences," he said.

When asked about the president's vow that the agents would be punished, Mayorkas said he is going to "let the investigation run its course."

"I know the president was echoing sentiments of the American public response, images and what those images suggest, but I want to speak to the fact that this investigation will be based on facts that the investigators learn," Mayorkas said.