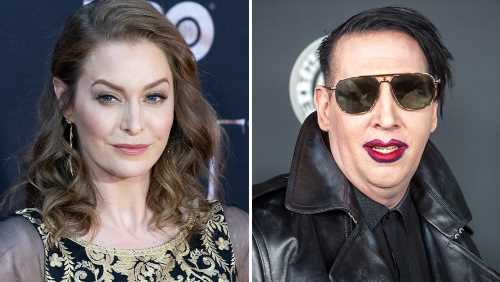 The judge wrote that “a reasonable jury could find that the effects of Warner’s alleged unconscionable acts, including the perceived threat to Plaintiff’s safety, immigration status, and career, persisted years after her last contact with Warner,” and ordered Warner to file a formal answer to each of the claims made in the lawsuit within fourteen days.

“My hope is that this ruling empowers other survivors to pursue justice for themselves while signaling to abusers that they cannot bully victims into silence,” said Bianco in a statement.

UPDATED with latest: Marilyn Manson has responded to a lawsuit filed by Game of Thrones actress Esmé Bianco today accusing the shock rocker of sexual assault and sexual battery.

Manson — whose real name is Brian Warner — spoke through an attorney, Howard E. King, who said the allegations have no merit.

“These claims are provably false,” King said in a statement. “To be clear, this suit was only filed after my client refused to be shaken down by Ms. Bianco and her lawyer and give in to their outrageous financial demands based on conduct that simply never occurred. We will vigorously contest these allegations in court and are confident that we will prevail.”

“Mr. Warner used drugs, force, and threats of force to coerce sexual acts from Ms.
Bianco on multiple occasions,” states the detailed complaint filed in federal court in California by the actress who was involved with Manson AKA Brian Warner from 2009 to around 2013. “Mr. Warner raped Ms. Bianco in or around May 2011,’ the jury trial seeking filing adds (read it here).

“Ms. Bianco was well aware of the violence Mr. Warner could dole out if she fought back, having been on the receiving end of his temper many times,” continues the 10-page document from attorney Jay D. Ellwanger on behalf of the British-born Bianco. “He also supplied drugs to Ms. Bianco and deprived her of sleep and food in order to weaken her physically and mentally and decrease her ability to refuse him. Mr. Warner committed sexual acts with Ms. Bianco when she was unconscious or otherwise unable to consent.”

The complaint also names Manson’s ex-manager as a defendant.

Tony Ciulla and his self-titled company are accused of violating human trafficking laws because they flew her from the UK to LA in 2007 and 2011 with promises of work in an unreleased music video and unmade film. Bianco additionally alleges she was forced to perform “unpaid labor” by Manson. That work included “serving and preparing food for Mr. Warner and his guests, cleaning his apartment, consulting on his album, providing uncredited backup vocals during the creative process for the album Born Villain, and being offered up to his guests and bandmates to ‘spank,’” the suit says.

Bianco is asking for wide-ranging damages from the court.

Reps for Manson nor Ciulla did not respond to requests for comment from Deadline. Manson is currently under investigation by the LA Sheriff’s department for multiple domestic abuse allegations from approximately half-a-dozen women, and maybe more.

“It took Ms. Bianco years to understand the extent of Mr. Warner’s physical, sexual,
psychological, and emotional abuse,” today’s filing says. “Her career suffered due to the deterioration of her mental health caused by Mr. Warner. She deals with complex Post-Traumatic Stress Disorder, anxiety, depression, and panic attacks to this day as a result.”

Magicians alum Bianco has been a major proponent along with another ex of Manson’s, Evan Rachel Wood, of California’s Phoenix Act, which extended the Golden State’s statute of limitations on domestic violence by five years. The Phoenix Act became law last year.

Manson was dropped by CAA, his label and roles in Starz’s American Gods and Shudder’s Creepshow in early February after Wood detailed her own wretched experiences with the “Beautiful People” singer. Taking to social media at the time, Wood wrote that the now 52-year old Manson “horrifically” abused her when they were together. The Westworld actress and anti-domestic violence activist  also stated that Manson was systematically “grooming” her when she was still a teenager. “I was brainwashed and manipulated into submission,” revealed Wood. “I am done living in fear of retaliation, slander or blackmail.”

Manson, at the time, denied the allegations.