For the global consumer giants that sponsor the Olympics, the Beijing Winter Games will be a high-wire act of marketing.

The events are a showcase in one of the most important markets for the Games’ biggest sponsors, including Intel, Procter & Gamble, Coca-Cola and Toyota. Not all disclose how much annual revenue they generate in China, but Bloomberg data and analysis by Strategy Risks, a US firm that measures corporate exposure to China, suggest that 10 of the 12 top overseas sponsors combine to bring in $US110 billion ($150 billion) a year there. 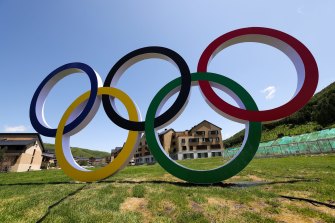 The Beijing Winter Olympics are due to start in February. Credit:Getty

Outside of China, though, politicians and human rights groups have been pushing those same companies, as well as their competitors, to use their platform to condemn Beijing’s treatment of ethnic minorities in Xinjiang, which the US and some European lawmakers say is a genocide. Some have also called for at least a diplomatic boycott of the games.

Unwilling to upset either constituency, sponsors are treading very lightly. Of the 12 top overseas sponsors, only Swatch Group’s Omega brand and Airbnb responded to Bloomberg’s questions about the potential political minefields or even their overall plans for the games. Nine companies declined to comment and one couldn’t be reached.

“As a global brand, we are certainly aware of international tensions and monitor them carefully,” Omega said in a statement. The Swatch Group brand has been a top sponsor of the Olympics since 2004. “We sincerely believe that the Olympic Games is a perfect opportunity to meet on common ground in the spirit of unity.”

Airbnb affirmed that its China business is small, only about 1 per cent of its annual revenue, but relevant. “We believe China is an important part of our mission to connect people from around the world and from different backgrounds, now more than ever,” spokesperson Harry Han wrote in an email.

In a US Congressional hearing in July on corporate sponsorship of the Beijing winter games, representatives from Coca-Cola, Airbnb, Procter & Gamble, Intel and Visa had similar messages: They support human rights, they support the Olympics. Intel was the only firm to specifically address Xinjiang in its testimony, saying it does not source from the region.

Sponsoring the 2022 Olympics “does not negate nor does it undermine our commitment to respect human rights or our activities to prevent the risk of human rights violations,” Intel General Counsel Steven Rodgers said in his testimony.

China denies any forced labour in the western province, calling the allegations the “biggest lie of the century.” It says its policies are lifting the region out of poverty, boosting the economy and countering extremism.

Human rights advocates disagree, and they say the companies that support the Beijing Olympics are helping China use sports to distract from what’s happening in Xinjiang. Human Rights Watch calls it “sportswashing.” “The Chinese government is unquestionably using the winter Olympics to hide their abuses and to imply that the world approves,” the organisation says on its website. 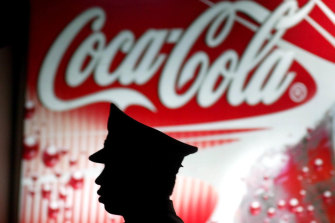 Coca Cola is one of the top international sponsors of the winter Games.Credit:AP

Firms may find it hard to stay out of the fray, no matter what they do or don’t say. “A lot of these companies have branded themselves as tolerant and diverse – they believe in Black Lives Matter, they believe in voters’ rights,” said Strategy Risks founder Isaac Stone Fish. “There’s no risk-free strategy for any of them.”

The risks of doing business in China have risen significantly, as companies have learned the hard way. In the spring, consumer companies including Nike, Adidas, Fast Retailing’s Uniqlo and Swedish retailer Hennes & Mauritz saw their China sales hit after they criticised the treatment of Muslim workers in Xinjiang.

“Companies will find it challenging balancing the sensitive needs of Chinese consumers with increasingly vigilant watchers in the West, both of whom can have a material impact on revenue,” said Mark Tanner, managing director of Shanghai-based marketing and branding firm China Skinny, whose clients include Ikea, Colgate-Palmolive and Nike.

The revenue analysis excluded the Beijing Olympics’ top Chinese sponsor, Alibaba Group, and Visa, which hasn’t been approved for bank card clearing services in the country. France’s Atos SE has several offices across China but doesn’t make public information about its revenue there. The company declined Bloomberg’s requests for more details.

China’s strict pandemic control measures also blunt some of the potential impact of a diplomatic boycott, said Joerg Wuttke, head of the European Union Chamber of Commerce in China. They also mean “a toned down event from the business side.”

Ordinarily, companies would use the events to entertain top clients and partners. As of now, China said it will sell tickets for the Games, but only people who live in China are allowed to attend, and that Beijing will conduct the games in a so-called “closed loop”. Those measures and others make it a lot harder – and less fun – to play host at the games. Elsewhere, China currently still requires international travellers to quarantine for 21 days upon arrival.

Omega said that given restrictions due to the pandemic, the watchmaker is likely to “limit the number of marketing staff on-site, as well as social activities or events that could present a risk to guests and staff.”

Regardless of pandemic restrictions, sponsoring companies will still be under pressure at home to account for their Chinese operations. Legislation critical of China’s Xinjiang policies is on the docket for US lawmakers, which raises the stakes, at least for the US companies. As much as they don’t want to anger Chinese consumers, Stone Fish said, they also don’t want high-profile politicians to turn them into “the poster child for helping out the Chinese Communist Party.”