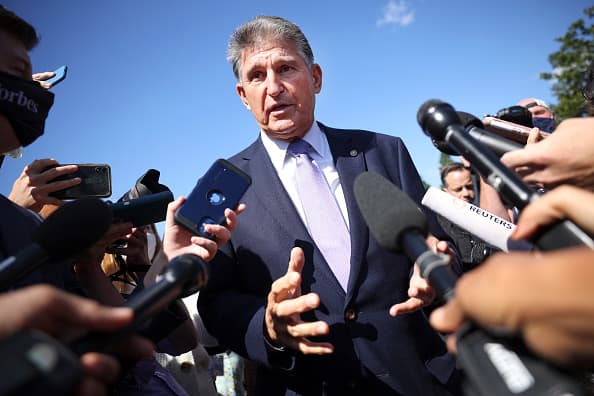 The estimation, from the Niskanen Center's Robert Orr and Samuel Hammond, finds 37.4 million children could lose out on the federal aid. That would mean a cut in benefits for 60% of the kids who are currently receiving the monthly payments, worth up to $300 per child.

Manchin's home state of West Virginia would see a 58% cut in recipients with the income cap, with almost 190,000 fewer children qualifying, the analysis finds.

President Joe Biden has made the enhanced CTC a cornerstone of his fight against childhood poverty. Thanks to the American Rescue Plan, which became law earlier this year, the CTC was increased from $2,000 per child to $3,000 or $3,600, depending on the age of the child, for many families. Half of it was made advanceable, and more families than ever qualify as it was extended it to families earning little to no income for the first time.

Economists say the extended credit can fulfill Biden's goal of significantly reducing childhood poverty. If extended through 2025, the child poverty rate would fall from 14.2% to 8.4%, a recent analysis from the Urban Institute found. That's 4.3 million fewer children living in poverty — a 40% decrease.

Biden and seemingly every other Congressional Democrat, in both chambers, want to extend the CTC as is in the current budget negotiations, aside from Manchin.

There are few known details about Manchin's reported CTC "red line," including if there are different income thresholds for single and married parents, or if there is an income phase out, which could change the outcome.

The estimate also doesn't take into account a work requirement, which Manchin has repeatedly said he supports. A work requirement "would further reduce the number of children with access to the credit," the report says. In particular, it would preclude many whose parents are students or disabled and unable to work, or grandparents who claim their grandchildren as dependents.