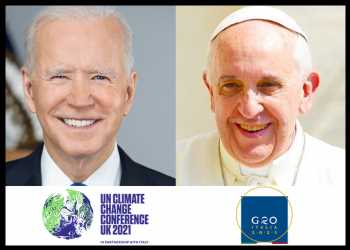 President Joe Biden will embark on a five-day tour of Europe at the end of this month to attend two important global summits and to meet with Pope Francis.

According to a statement issued by the White House detailing the President’s itinerary, Biden and First Lady Jill Biden will visit Vatican City and have an audience with the Pope at the Apostolic Palace on October 29. They will discuss working together on efforts grounded in respect for fundamental human dignity, including ending the COVID-19 pandemic, tackling the climate crisis, and caring for the poor.

Biden, who keeps a photo of one of his meetings with Pope Francis in the Oval Office, has met with the head of the Catholic church three times before.

The President will then travel to Rome to attend the G20 Leaders’ Summit to be held in the Italian capital on October 30 and 31.

The Summit is the climax of the G20 process and the final stage, at Leaders’ level, of the intense work carried out within ministerial meetings, working groups and Engagement Groups throughout the year.

From Rome, Biden will travel to Glasgow, Scotland, to attend the 26th Conference of the Parties to the UN Framework Convention on Climate Change (COP26). COP26 begins with the World Leader Summit on November 1-2.

COP26 requires countries to come forward with ambitious 2030 emissions reductions targets that align with reaching net zero by the middle of the century.

The Conference aims to finalize the Paris Rulebook (the detailed rules that make the Paris Agreement operational) and accelerate action to tackle the climate crisis through collaboration between governments, businesses and civil society.

This is only Biden’s second international trip since becoming President in January.

During his first tour abroad, Biden attended the G7 summit in England, NATO summit in Belgium, and had a summit meeting with his Russian counterpart Vladimir Putin in Geneva, Switzerland, in June.