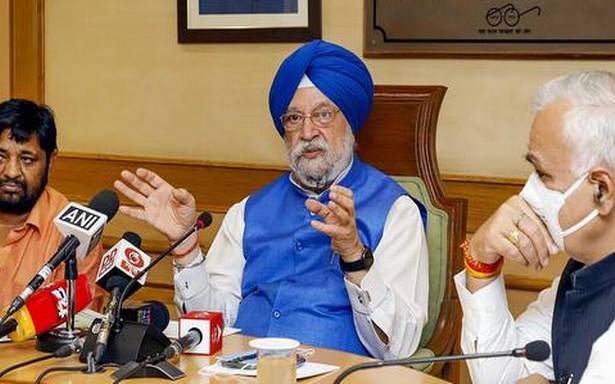 Reiterating that the excise duty levied on petroleum products is funding free COVID-19 vaccines and public welfare schemes, Petroleum and Natural Gas Minister Hardeep Puri said on Friday that global oil prices would likely fall by the time India vaccinates its entire population, indicating no tax cuts may be expected at that time.

Facing multiple queries about the high retail prices for fuels at the closing press conference of India Energy Forum by CERAWeek, Mr. Puri said the Centre has been charging ₹32 as excise per litre, irrespective of whether the oil price was $19 a barrel or $84 a barrel, whereas States charge an ad valorem duty.

Stressing that oil prices had risen following the global coal crisis caused by ‘severe winters somewhere and a problem between two countries’, the Minister said political narrative in India was ‘simplistic’ and didn’t grasp the ‘difficult causation’ at work.

“I think the simplistic political narrative in India — prices have gone up, why don’t you reduce your taxes? So every time prices goes up due to something else, it says you axe your own feet in the process. I am not very sensitive to that kind of discussion,” he said.

“Yesterday, we completed one billion vaccines being administered. We fed 90 crore people for one full year, three meals in a day. We do Ujjwala which is a social inclusion scheme getting the mothers, sisters and daughters away from unhealthy cooking fuels. We distributed eight crore cylinders and another one crore now. So that ₹32 of tax we collect, provides us the ability to provide all these welfare services including one billion vaccines,” Mr. Puri said.

Responding to a query if the government would cut petroleum taxes once the vaccination drive is completed across the country, the Minister said: “Arre yaar, tab tak to vaise hi daam neeche aa jaayenge yaar. Aap itni lambi soch kyon karte hain? (By then, prices will fall anyway, friend. Why do you think so far ahead)?”

“I am fully optimistic. If you see the analysis for 2022 from Opec-plus, supply is expected to be higher than demand. At that time, another question can crop up, which I don’t want to say here,” he added.

However, to a follow-up query about the outlays on vaccines and free foodgrains, the Minister said he had cited them as illustrative examples.

“This is not a question of arithmetic. Any democratically elected government has the duty to make roads and provide other facilities for their citizens. If we get guided by this talk and shut down everything… it is also possible later that they want to sell oil and you don’t need to take it at all,” he said.

“I can tell you the government is giving full attention to this. We are in a federal system. There is an element of excise from the Centre, there is an ad valorem percentage duty by the States irrespective of where the price is,” he said.

States had turned down the idea of including petroleum products under the Goods and Services Tax (GST) regime after Finance Minister Nirmala Sitharaman had placed a Kerala HC order regarding it at the recent GST Council meeting, the Minister said.

When asked by a Kolkata-based newspaper’s reporter whether tax cuts would be considered on fuel products to prevent an adverse impact on growth as higher volumes could help boost revenues, the Minister said the high oil prices in West Bengal are due to recent tax hikes by the State government.

“When I was there during a political meeting, I was asked why the prices have gone up, I said the State government has raised it by ₹3.51 since July and that is the result,” he said.

On India making a case for the OPEC to lower oil prices, Mr Puri said this was not an adversarial issue and is in the interest of oil-producing as well as consuming countries. “It is my responsibility as a partner to tell you the problems that could come up if a particular path is followed. We are not making a case. We have a sovereign right and can do a lot of things ourselves,” he said.

Taking aim at the UPA government for its issuance of oil bonds to rein in runaway oil prices during its tenure, Mr Puri said: “Petrol prices were deregulated in 2010, that means you are effectively on world market prices. Now in order to solve the problem at one point of time, somebody decided to issue oil bonds worth ₹1,40,000 crore… It’s short-term expediency that solved a problem today but created problems for tomorrow and day after.”