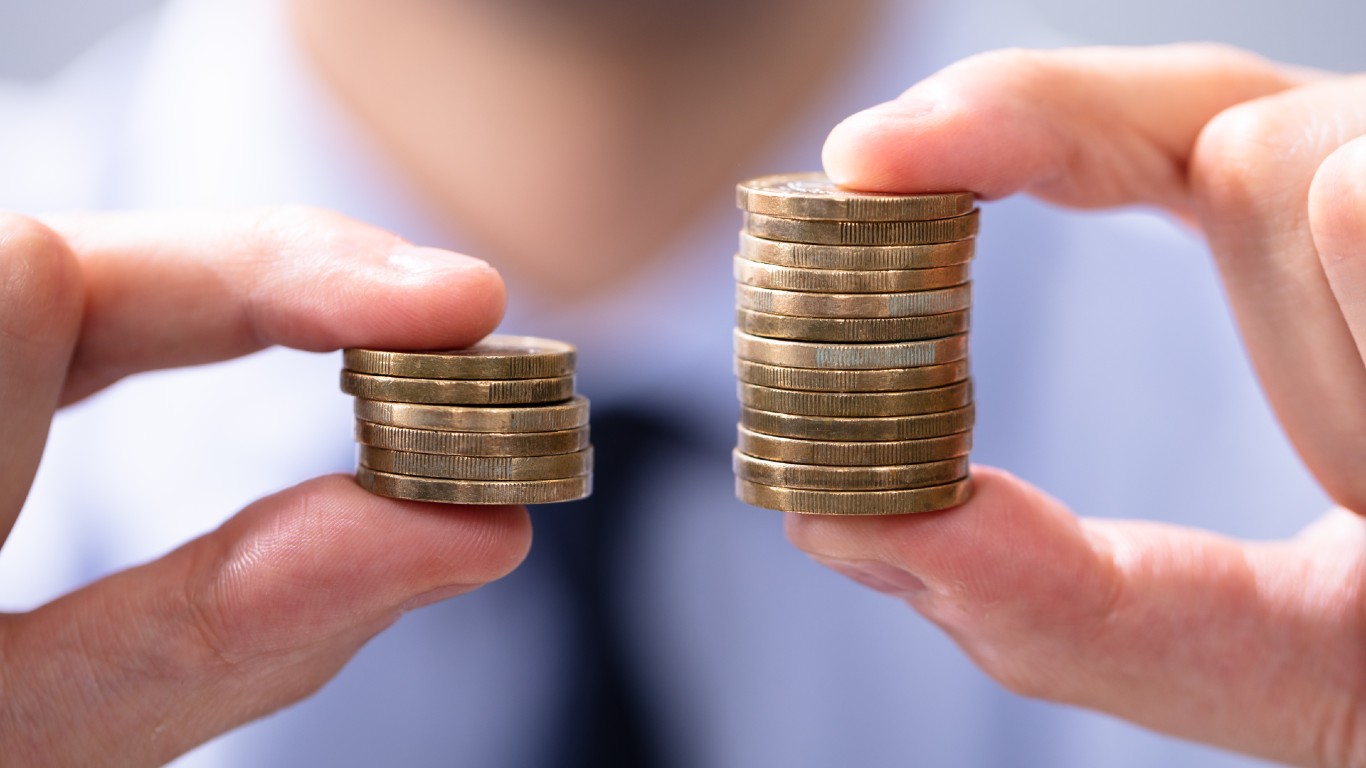 The “rich get richer” trend in America has continued through the COVID-19 pandemic. The top 1% of Americans based on wealth have more assets than the 60% of Americans who are considered middle class. In the second quarter of this year, the same top 1% had a combined household wealth of $36 trillion.

The silver lining for the poor over the same period is promising but dim. Federal pandemic aid programs kept about 11 million Americans out of poverty. There are two challenges directly ahead. These programs expire, and inflation is already increasing the core costs of living in America.

Income differences vary widely from state to state, county to county and city to city. In some cases, the divide is mind-numbing.

Using data from the U.S. Census Bureau’s 2019 American Community Survey (ACS), 24/7 Wall St. identified the U.S. towns with the widest income gaps. Towns are ranked by their Gini coefficient, a measure of income inequality based on the distribution of income across a population on a 0 to 1 scale (0 representing perfect equality and 1 representing the highest possible level of inequality). For the purposes of this story, towns are defined as any place covered by the census with populations between 1,000 and 25,000.

Among the top 50 towns we examined based on income inequality, Gini scores are as high as 0.771, well above the national Gini coefficient of 0.482. These towns are largely concentrated in southern states, including six in Florida and five in Georgia.

The causes of rising inequality are complex and varied. A report published by the National Bureau of Economic Research ties the rising disparity to a range of economic factors, including globalization, technological advancement, a stagnant minimum wage and the decline of labor unions.

The town with the highest income gap is Lake Providence, Louisiana. Here are the details:

Our methodology: To determine the towns with the widest income gaps in the nation, 24/7 Wall St. reviewed five-year estimates of the Gini Index of income inequality from the ACS. This index summarizes income dispersion in an area on a scale from 0 to 1. A value of 0 indicates perfect equality; that is, everyone in the area receives an equal share of income. A value of 1 indicates perfect inequality, or only one recipient receives all the income.

We used census “place” geographies, a category that includes 29,573 incorporated legal entities and census-designated statistical entities. Of those, 29,320 had boundaries that fell within one of the 50 states or the District of Columbia.

We defined towns based on population thresholds (mentioned above), and 13,332 of the places fell within these thresholds.

Towns were excluded if the Gini Index was not available in the 2019 ACS, if there were fewer than 1,000 housing units or if the sampling error associated with a town’s data was deemed too high. The sampling error was defined as too high if the coefficient of variation (a statistical assessment of how reliable an estimate is) for a town’s Gini Index was above 15% and greater than two standard deviations above the mean coefficient of variation for all towns’ Gini Indices. We similarly excluded towns that had a sampling error too high for their population, using the same definition.

The remaining 7,698 places were ranked based on their Gini Index. To break ties, we used the share of aggregate household income earned by the top 20% of households.

Click here to see all of America’s towns with the largest income gaps.