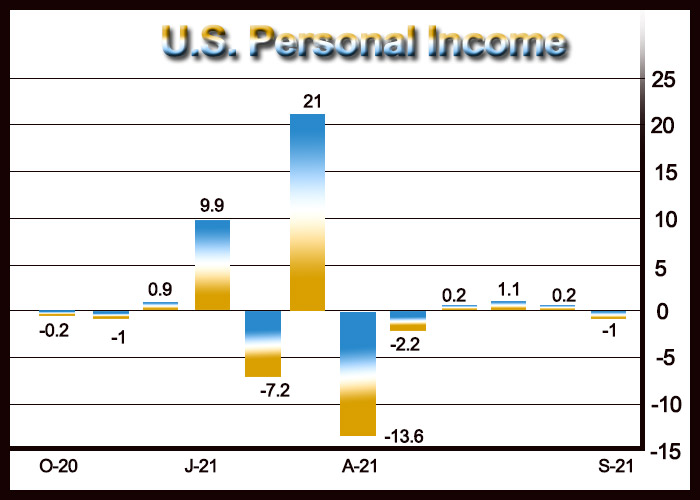 A report released by the Commerce Department on Friday showed personal income in the U.S. decreased by much more than expected in the month of September.

The bigger than expected drop in personal income primarily reflected a decrease in government social benefits, both in unemployment benefits and “other” benefits.

Meanwhile, the report showed personal spending climbed by 0.6 percent in September after jumping by an upwardly revised 1.0 percent in August.

Economists had expected personal spending to rise by 0.5 percent compared to the 0.8 percent increase originally reported for the previous month.

Excluding price changes, personal spending rose by 0.3 percent in September after climbing by 0.6 percent in August.

With income slumping and sales rising, personal saving as a percentage of disposable income dropped to 7.5 percent in September from 9.2 percent in August.

A reading on inflation said to be preferred by the Federal Reserve showed the annual rate of core consumer price growth in September remained at 3.6 percent for the fourth straight month.

“We expect core PCE inflation will peak above 4% in November and only fall below 3.5% by April 2022, thereby testing the Fed’s patience,” said Lydia Boussour, Lead US Economist at Oxford Economics.

“We continue to believe the Fed will avoid the policy error of tightening policy too early in the face of supply-driven inflation, but its outcome-based FAIT framework will come under increasing stress in Q1 2022,” she added. “As such, the Fed could be pressured by markets to raise rates earlier than our current forecast of December 2022.”