Constitution dictates abortion should be left to states: Carrie Severino

The liberal media fawned over a pro-abortion “Saturday Night Live” skit over the weekend that a conservative comic slammed as “leftwing talking points on air with zero humor attached.”

Cecily Strong played Goober the Clown, who “had an abortion at age 23,” and joined “Weekend Update” to discuss her situation. Colin Jost set up the bit by welcoming Goober to discuss the “controversial Texas law that essentially bans all abortions after just six weeks.” 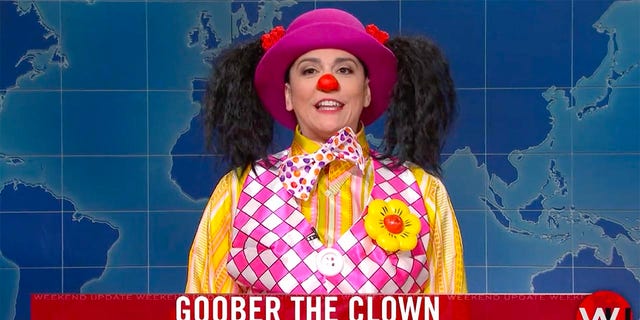 Cecily Strong played Goober the Clown, who "had an abortion at age 23."

Strong, dressed as Goober the Clown, began by joking that she wanted to “clown around” before diving into the pro-abortion portion of the program.

“I had an abortion the day before my 23rd birthday,” Goober announced. “People keep bringing it up, so I’ve got to keep talking about freaking abortion, but it’s a rough subject so we’re gonna do fun clown stuff to make it more palatable.”

Strong’s clown character then made a balloon animal while diving into the topic.

“I wish I didn’t have to do this, because my abortion at 23 is my personal clown business, but that’s all some people in this country want to discuss all the time, even though clown abortion was legalized in Clown v. Wade in 1973,” Strong said. “Did you know one in three clowns will have a clown abortion in her lifetime? You don’t because they don’t tell you, they don’t even know how to talk to other clowns about it.”

Strong went on to explain that abortion are extremely common among “clowns,” which Jost eventually pointed out was clearly a pseudonym for “women” throughout the bit.

“Here’s my truth,” Strong said as she sucked helium from a balloon. “I know I wouldn’t be a clown on TV here today if it wasn’t for the abortion I had the day before my 23rd birthday.”

The liberal media was quick to celebrate the routine. CNN’s left-wing media correspondent Brian Stelter even led his media newsletter with a roundup of the praise.

“Normally I wouldn’t lead a Sunday night newsletter with “Saturday Night Live.” But this weekend was no normal ‘SNL’ episode. Review after review, recap after recap, proclaimed that it was punchy and provocative,” Stelter wrote, before linking to the “Goober the Clown” video. “I found that it took a second viewing to fully appreciate what Strong was doing.” 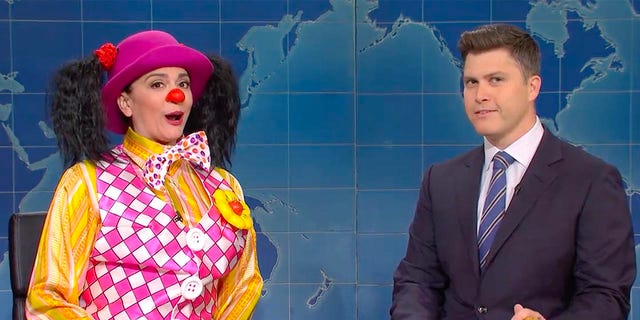 Cecily Strong’s Goober the Clown joined Colin Jost on "Weekend Update" to discuss her abortion in a sketch praised by the liberal media.

Vanity Fair called the Goober the Clown skit the night’s “most powerful moment,” declaring “anything else the show did last night was gravy.”

TheWrap’s Andi Ortiz published a roundup of activists praising the skit, while The Daily Beast called it “brilliant.”

“Strong used the absurdity of her concept and manic quality of her performance to underscore some sobering facts,” Daily Beast entertainment reporter Laura Bradley wrote.

“She used the cover of being dressed like a clown to get extremely real about a woman’s right to choose,” TheWrap reported in a separate article. Countless liberal members of the media took to Twitter to praise the sketch, including The Atlantic’s Deborah Copaken who asked who wrote it.

“Please give them their preemptive Emmy right now,” Copaken wrote.

Podcaster Quinn Cummings added, “This is brilliant,” while reporter Caroline Reilly said the sketch “literally brought tears to my eyes.” 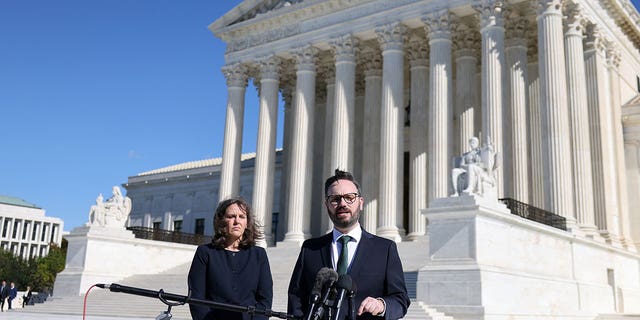 Attorney Marc Hearron with the Center for Reproductive Rights and attorney Julie Murray with Planned Parenthood, speak to the media following arguments over a challenge to a Texas law that bans abortion after six weeks, in front of the United States Supreme Court in Washington, U.S., November 1, 2021.
(REUTERS/Evelyn Hockstein)

The president of Panned Parenthood even complimented it.

“Our stories power our fights for justice and freedom — even when, no joke, they make us laugh, too,” Alexis McGill Johnson wrote.

“The humor in this, if anything, is found in the irony that you’re a clown if you believe reading talking points about abortion is somehow entertainment to Americans,” Young said. “Unlike Dave Chappelle or even Bill Maher, ‘SNL,’ with a room full of liberal writers, can’t seem to piece a joke together when dealing with serious issues. They just want to scream talking points, which will only get their liberal media friends like Brian Stelter to cheer.”

Young then mocked Stelter’s ratings, as the liberal pundit recently finished October with his smallest monthly audience of 2021.

“It’s important to note that Stelter has lost track of what gets viewers on his own show, so you should probably be worried if he thinks your programming is good,” Young said. “Maybe NBC should just have Stelter join the cast of ‘SNL’ at this point.”