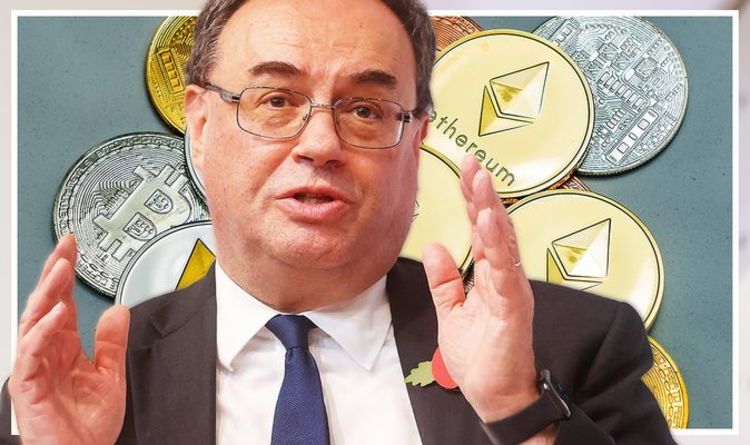 The comments came during discussion about the concept of a central bank digital currency (CBDC), which the Bank is currently investigating. Speaking to the Lords Economic Affairs Committee, Mr Bailey said: “The latest estimate for crypto-assets now is $2.5tr (£1.87tr). That’s around the market capitalisation of the FTSE 100. Ninety five percent of it is unbanked crypto-assets, and the other five percent is so-called Stablecoins, some of which are more stable than others.”

He warned: “That’s a very big growth which has happened very rapidly.

Either seek greater regulation of asset backed stablecoins, which Mr Bailey said he was “sceptical about”, or look at some sort of central bank currency in digital form.

The Bank of England is investigating whether to introduce its own digital currency which would allow households and businesses to make electronic payments using money issued by the Bank.

The Bank currently provides physical money in the form of banknotes and electronic money to banks and financial institutions.

If introduced, a CBDC would allow everyone to make payments using a digital currency.

Popularly dubbed Britcoin, the proposal has prompted some concern over the impact it could have on commercial banks if consumers shifted their money to a digital currency in large numbers.

This could see banks lose revenue as a result, however Sir Jon said competitive firms would be able to adjust to this.

Mr Bailey also clarified the Bank was not attempting to move into the retail bank account business.

Both central bankers committed to continue to provide cash to UK consumers with Sir Jon saying the Bank would maintain this “as long as there is demand for it”.

He added the Bank recognised there was a section of society, often more vulnerable, who relied on cash.

However, Sir Jon asked: “As cash declines and becomes less useful for the way in which people live their lives in a digital economy, should we replace it with a public asset, state money?

“Or should we depend entirely on the private sector to provide the money that is circulating in the economy?”

He insisted he had only ever affirmed the Bank’s commitment to price stability and had not at any point said rates would rise in November.