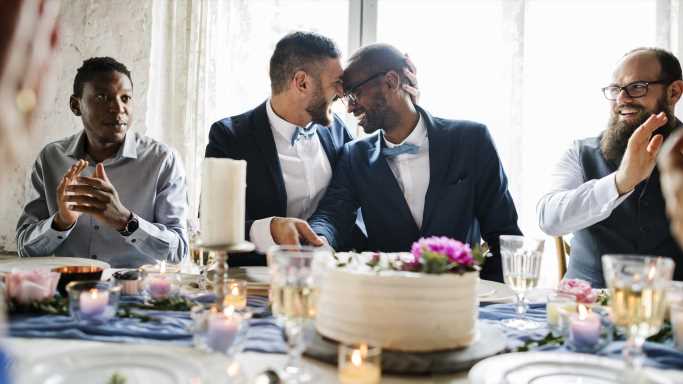 The most expensive wedding in modern times took place in 2004, according to the Guinness Book of World Records. The wedding of Vanisha Mittal, daughter of Indian steel magnate Lakshmi Mittal, and investment banker Amit Bhatia was a private, six-day event that took place at Versailles, with the ceremony at the palace itself. It featured performances by King of Bollywood Shah Rukh Khan and Aussie pop singer Kylie Minogue, costing a grand total of $55 million.

For those of us that aren’t related to titans of global industry or members of royalty, wedding ceremonies cost way less — but can still set you back the cost of a new car. (These are the most lavish royal weddings in history.)

According to a recent analysis of wedding-related spending data conducted by research firm ValuePenguin, the average wedding in the U.S. costs $20,300. This includes the reception venue and décor, the catering, the photographer, the band, the photographer, and, of course, the rings. It doesn’t include the wedding cake and invitations that can each cost hundreds of dollars.

Hosting a wedding ceremony in expensive places can add up to a third above that national average. According to the analysis, weddings in Connecticut can set the couple back an average of $29,499, while the cost is about half that in Montana. And though no one marries with the intention of getting divorced, this is how much it costs to get divorced in every state.

To identify the most expensive big cities to get married in, 24/7 Wall St. reviewed data from ValuePenguin about the average cost of a wedding in the largest U.S. metropolitan area. Wedding costs range from  $20,044 in the least costly city to $33,697 in the most expensive city.

Weddings can be one of the costliest expenses a new couple and their families incur as the couple begins a new life together, but it doesn’t have to be. One can always opt to get married at the local city clerk’s office for a small administrative fee and host a small reception after with closest friends and family. Here are the most expensive large cities in which to get married.

To identify the most expensive big cities to get married in, 24/7 Wall St. reviewed data from ValuePenguin. “ValuePenguin researchers used data from The Wedding Report on the overall cost of a wedding over time. Researchers determined the average spend per wedding feature using per-item spending data from The Knot. Data related to the total number of weddings per year is from the Centers for Disease Control and Prevention.”

The estimated number and percentage of people who have never married or are divorced in each metropolitan area came from the U.S. Census Bureau’s 2019 American Community Survey and are annual estimates.