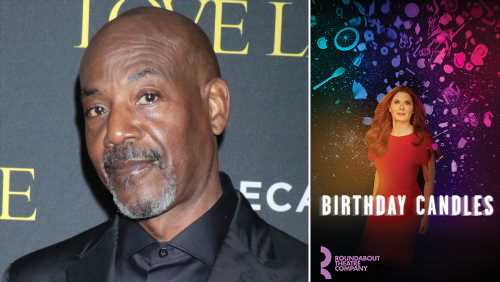 The Roundabout Theatre Company production, which begins previews March 18 and opens April 10, was originally set to debut in spring 2020 but was postponed due to the Covid shutdown. At the time, Andre Braugher was set to co-star with Messing and Colantoni.

The limited engagement of Birthday Candles will run through May 29 at the American Airlines Theatre. Vivienne Benesch directs.

Jelks is known to Broadway audiences for his role in Lynn Nottage’s Pulitzer Prize-winning Sweat (2017) and his Tony-nominated 2007 performance in August Wilson’s Radio Golf. He had previously appeared in Wilson’s Gem of the Ocean. Other stage work includes Tarell Alvin McCraney’s Head of Passes, co-starring Phylicia Rashad, at the Public Theater Off Broadway and L.A.’s Mark Taper Forum.

As described by Roundabout, Messing (Will & Grace) stars as Ernestine Ashworth, “who spends her 17th birthday agonizing over her insignificance in the universe. Soon enough, it’s her 18th birthday. Even sooner, her 41st. Her 70th. Her 101st. Five generations, dozens of goldfish, an infinity of dreams, one cake baked over a century. What makes a lifetime…into a life?”