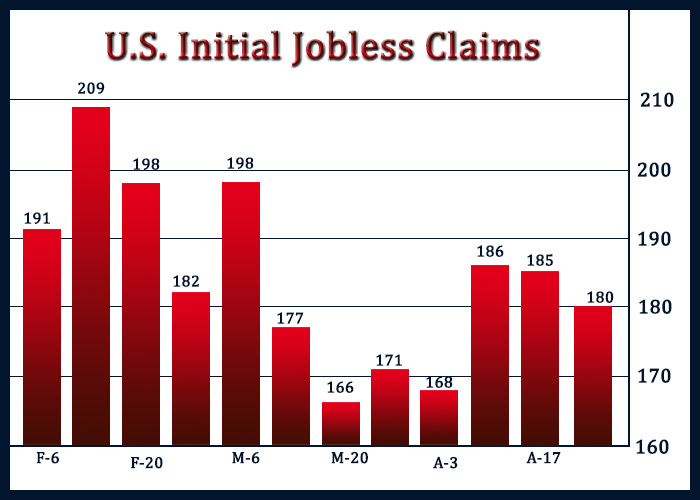 Economists had expected jobless claims to slip to 180,000 from the 184,000 originally reported for the previous week.

“We expect initial claims to remain around these levels, as employers, who continue to struggle to attract and retain workers, will keep layoffs to a minimum,” said Nancy Vanden Houten, Lead U.S. Economist at Oxford Economics.

She added, “Even as the economy slows in response to high inflation and rising interest rates, we expect employers will be more likely to slow the pace of hiring than to let go of workers.”

Meanwhile, the Labor Department said the less volatile four-week moving average crept up to 179,750, an increase of 2,250 from the previous week’s revised average of 177,500.

The report also showed continuing claims, a reading on the number of people receiving ongoing unemployment assistance, edged down by 1,000 to 1.408 million in the week ended April 16th, hitting the lowest level since February 1970.

Next Friday, the Labor Department is scheduled to release its more closely watched monthly employment report for April.

Economists currently expect employment to jump by 400,000 jobs in April after surging by 431,000 jobs in March, while the unemployment rate is expected to hold at 3.6 percent.