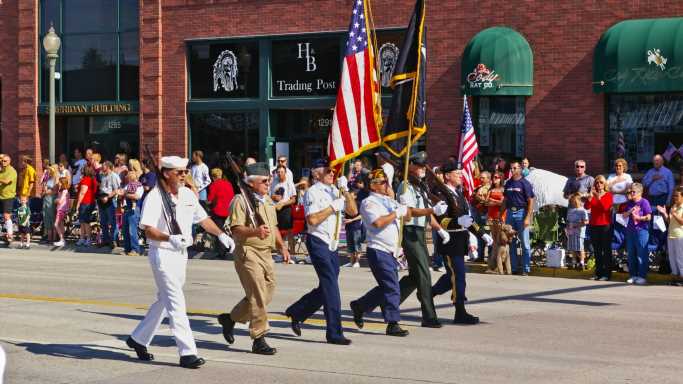 Young Americans enlist in the armed services for many reasons, including the opportunity to gain new skills, get physically fit, and earn financial assistance to pay for college. One of the most common reasons, however, is to serve the country. On top of the more than 1.4 million active-duty service members in the military, the United States is home to over 17.8 million veterans.

The sacrifices veterans have made for the country often follow them long after their service. Nearly half of those who served after the terror attacks of 9/11 say they had an emotionally traumatic or distressing experience while serving, and about one in four of all veterans say readjusting to civilian life was at least somewhat difficult, according to a Pew Research study.

Still, the same study also found that over half of all veterans say their service provided them with useful skills and training for the civilian job market, and that veterans are less likely to live in poverty and more likely to have higher incomes than their nonveteran counterparts.

Veterans of the armed service reside in communities across the country, but some parts of the country have a considerably higher concentration of military vets than others. Using data from the U.S. Census Bureau, 24/7 Wall St. identified the 50 counties with the most veterans. Counties and county equivalents, which can include independent cities, are ranked by the share of adult residents who are veterans.

Most counties on this list are in the South. In every county on this list, more than one in every 10 adults have a history of military service. In some, they account for more than one in every five adult residents. For context, 7.1% of the total U.S. civilian adult population have served in the military. Here is a look at the U.S. presidents who have served in the military.

It is important to note that while many veterans chose to enlist out of a sense of patriotic duty – including a considerable share of the 2.4 million who enlisted after 9/11 – many living veterans did not choose to serve and were drafted into service during the Vietnam War. In most counties on this list, those whose period of service is confined to the Vietnam Era account for over 20% of the total veteran population. Here is a look at the wars that claimed the most American lives.