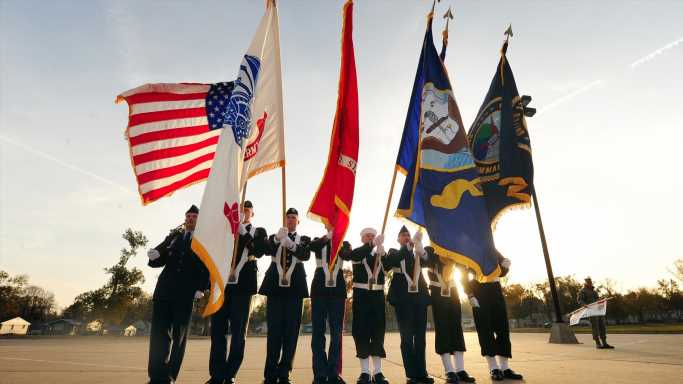 The Department of Veterans Affairs says there are 19 million veterans in the United States. These include a few who served in World War II, which ended in 1945, and a large number who leave the military each year today. Those who have served get a modest set of benefits when they retire, including access to VA hospitals, pension and disability compensation, home loans and education programs.

The human toll of American military conflicts extends far beyond those killed or missing in action. About 30% of veterans nationwide have a disability, and about 41% of Americans who have served since Sept. 11, 2001, have a disability connected with their service. These typically include missing limbs, burns, spinal cord injuries, post-traumatic stress disorder, hearing loss and traumatic brain injuries.

Using data from the U.S. Census Bureau, 24/7 Wall St. identified the state with the most veterans. Nationwide, veterans account for 6.9% of the adult population. Depending on the state, veterans make up anywhere from less than 5% of that population to over 10%.

While there are some exceptions, many states that are home to a high concentration of veterans are also home to major military bases and many active-duty troops.

To determine the state with the most veterans, 24/7 Wall St. reviewed data on veteran status from the Census Bureau’s 2019 American Community Survey (ACS). States were ranked based on the number of veterans as a percentage of the 18 and older population. Supplemental data on veteran median income, disability status and labor force participation rates, as well as the percentage of veterans that fought in each major U.S, war, also came from the ACS.

The state with the most veterans is Alaska. Here are the details:

Click here to read States With The Most Veterans