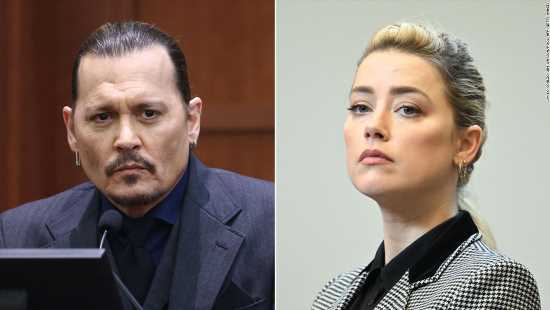 New York (CNN Business)“It’s like the O.J. Simpson trial but with technology.”

That’s what Autumn Witbeck, a stay-at-home mother in Utah, told the Wall Street Journal while explaining the public’s fascination with the Johnny Depp-Amber Heard trial. The Journal wrote an entire story about the hairstyles on display in the courtroom — which helps to prove the point.
Some onlookers have found the trial riveting while others have found it revolting. Digital armies of fans have mobilized on Depp’s side while commentators have raised concerns about the imbalances on display.

At issue in the trial is Depp’s claim that Heard, his ex-wife, defamed him in a Washington Post op-ed. Heard countersued Depp. But the spectacle surrounding the case has become about so much more than that.

Monday commenced the sixth and final week of the trial. So here are several of the media angles in the mix…

A straightforward case, but:

I savored every word of this column by Los Angeles Times columnist Mary McNamara: “It is day 857 in the Johnny Depp/Amber Heard defamation trial and all I can say is I hope the upcoming House committee hearings on the Jan. 6 attack on the U.S. Capitol get as much attention from the public and the press.”

The 1/6 hearings in June will get more attention from the press, by the way. But more attention from online influencers and algorithms and ordinary users? Maybe not.
As McNamara wrote, the reaction to Depp and Heard “has revealed a still-alarming bias against women. What the jury makes of it — sorry, hashtag creators, you don’t actually get to decide the case — remains to be seen. Setting aside the melodrama (though melodrama feels like the whole point), it’s a fairly straightforward case.”
Jessica Winter made a similar point in this new commentary for The New Yorker: The trial “is the sludge pit of an outlandishly toxic relationship,” but “so much of the online chatter about the trial is noise rather than signal; it has obscured how simple the core matter is, and how that simplicity makes the case all the more bizarre and tragic.”
The entirety of the trial really rests “on twelve words” from Heard’s 2018 Post op-ed, Winter wrote, even though it turned into a “high-budget, general-admission form of revenge porn.”

The online attack campaign against Heard is an important part of the story, but as with so many of these campaigns, it is devilishly hard to trace. “A years-long campaign of misinformation and online attacks seeded the playing field” for the trial, Puck’s Matt Belloni wrote in a new piece titled “Johnny Depp’s Fake News.” Bots on Twitter drove at least some of the anti-Heard sentiment seen in recent years.
“For the lawyers who operate in this world,” Belloni wrote, “that’s what’s so scary: In John C. Depp v. Amber Laura Heard, the dark arts of media manipulation for political gain have come to Hollywood disputes, and there’s no going back. These cases are now about the fight behind the fight as much as the fight in public view, and everyone is marveling at how effective Team Depp has been. That means when the next situation comes up, the first question out of a client’s mouth will be, Where’s my Johnny Depp strategy? And if a lawyer wants to keep the client, he or she better have an answer.”

— “Experts say the trial highlights structural problems — in media reporting, in the power of social media platforms, in the way gender inequality is addressed, in the way the justice system may become weaponized, in the way we all become complicit in retraumatizing people who have experienced profound harm,” Alia E. Dastagir reported for USA Today.
— “The consequences of the defamation trial seem to have gotten lost in the media circus surrounding it,” but “it could have a very chilling impact on domestic violence survivors,” Alanna Vagianos wrote for HuffPost.
— “Perhaps one lesson from this spectacle is not about belief at all — but decency,” Jessica Bennett commented.
— Vice’s Anna Merlan documented how “big media companies, true crime TikTokers and, now, little-known YouTubers” have converged onto the trial “to grow their audiences any way they can.”
— Kaitlyn Tiffany wrote for The Atlantic about “the paranoid style in online fandom.”
— Simply put, “the internet wasn’t built for this,” NBC’s Kat Tenbarge tweeted, citing the online mob that plastered negative reviews to hurt expert witnesses in the case.
— “#MeToo is over if we don’t listen to ‘imperfect victims’ like Amber Heard,” Martha Gill wrote for the Guardian.
— “Depp v. Heard isn’t some referendum on #MeToo, nor will it set back anyone’s causes by re-unleashing some chilling threat to silence women for speaking out,” Natalie Shure wrote for The New Republic. “This trial is just a referendum on the reputation of two rich and famous actors who treated each other jaw-droppingly terribly, in the most dramatic fashion possible. Depp v. Heard is about Johnny Depp and Amber Heard, nothing more.”

— As Moises Mendez II said on Slate’s “ICYMI” podcast, “We’re all just along for the ride until something else comes along and takes over our collective consciousness.”
A version of this article first appeared in the “Reliable Sources” newsletter. You can sign up for free right here.
Source: Read Full Article