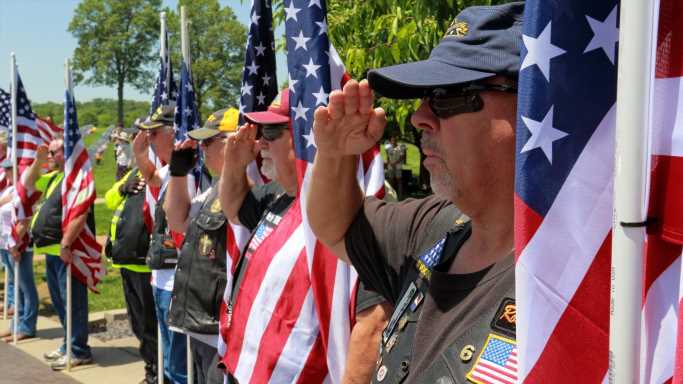 The Department of Veterans Affairs says there are 19 million veterans in the United States. These include a few who served in World War II, which ended in 1945, and now a large number who leave the military each year. Those who have served get a modest set of benefits when they retire, including access to VA hospitals, pension and disability compensation, home loans and education programs.

The human toll of American military conflicts extends far beyond those killed or missing in action. About 30% of veterans nationwide have a disability, and about 41% of Americans who have served since Sept. 11, 2001, have a disability connected with their service. These typically include missing limbs, burns, spinal cord injuries, post-traumatic stress disorder, hearing loss and traumatic brain injuries.

Veterans of the armed service reside in cities across the country, but some parts of the country have a considerably higher concentration of military vets than others. Using data from the U.S. Census Bureau, 24/7 Wall St. identified the U.S. city with the most veterans.

It is important to note that while many veterans chose to enlist out of a sense of patriotic duty (including a considerable share of the 2.4 million who enlisted after 9/11), many living veterans did not choose to serve but were drafted into service during the Vietnam War. In many cities on this list, those whose period of service is confined to the Vietnam Era account for over 20% of the total veteran population.

The city with the most veterans is Harker Heights, Texas. Here are the details:

Methodology: To determine the city with the most veterans, 24/7 Wall St. reviewed five-year estimates of the share of the civilian population 18 years and over who are veterans from the U.S. Census Bureau’s 2020 American Community Survey (ACS).

Cities were ranked based on the share of the population 18 and over who are veterans. To break ties, we used the number of veterans.

We used census “place” geographies, a category that includes incorporated legal entities and census-designated statistical entities. We defined cities based on a population threshold: census places needed to have a population of at least 25,000 to be considered.

Cities were excluded if the share of veterans was not available in the 2020 ACS, if the civilian population 18 and over was less than 1,000, or if the sampling error associated with a city’s data was deemed too high.

The sampling error was defined as too high if the coefficient of variation (a statistical assessment of how reliable an estimate is) for a city’s share of veterans was above 15% and greater than two standard deviations above the mean coefficient of variation for all cities’ veteran shares. We similarly excluded cities that had a sampling error too high for their population, using the same definition.

Additional information on the share of veterans who first enlisted after 9/11, in the Vietnam Era and during the Korean War are also five-year estimates from the 2020 ACS.

Click here to see all the cities with the most veterans.