In Professor Ross Garnaut’s much-praised speech to last week’s jobs summit, he told a story about politicians desperately seeking workers. At about the time Anthony Albanese was in Fiji talking about recruiting nurses, the West Australian premier was in Ireland, also trying to recruit nurses. 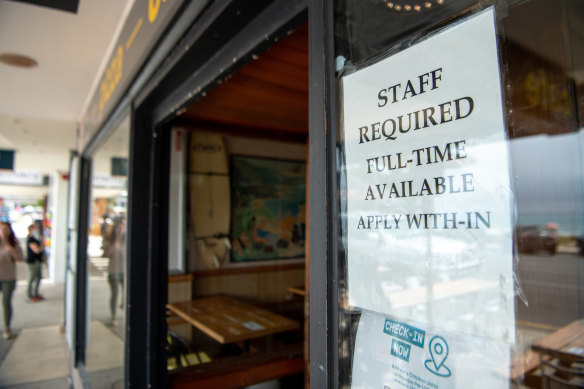 Garnaut’s point was that, when a country underpays its nurses, it’s open to having them pinched by another, better-paying country.

But I drew a different conclusion. It’s all very well for the nation’s employers to go to Canberra complaining about the desperate labour shortage and demanding that the government lift its target for how many visas for permanent immigrants it will issue this year.

Albanese was persuaded to raise the target from 160,000 to 195,000. But when we’re short of skilled labour at the same time many other rich countries are also short, raising the target and achieving the target are two different things.

My guess is that we’ll be hearing complaints about labour shortages for years to come. And I’m not sure that will be a bad thing. Give me a choice between a jobs market that’s “tight” – as it is now – and one that’s “loose”, with high unemployment, and I know which I’d prefer.

Journalists are trained to be sceptical of claims people make. And when economists hear people complaining that they can’t get enough workers, or that there’ll be shortage of X thousand teachers/doctors/chicken sexers by the year Y, they’re more questioning than sympathetic.

For a start, some part of the worker shortages we keep hearing about is caused by people off work because of COVID. This, surely, must be a problem that will ease in coming months. For another thing, while shortages of skilled workers get the most publicity, many of the shortages are actually for relatively unskilled work as a waiter or behind a counter.

When economists hear businesspeople complaining they “can’t get the staff”, their first question is: have you tried offering a higher wage? What employers never say is “with the low wage and bad conditions I’m offering, I can’t get any takers”. Think fruit-picking.

When you hear of bosses so desperate that they’re giving their existing workers a “loyalty bonus” or offering new workers a “sign-on bonus”, remember this: paying any kind of once-off bonus is a way of avoiding granting a proper pay rise.

This means they’re not yet at desperation point. Sometimes I wonder if businesses are delaying improving pay and conditions while they increase pressure on the government to solve their problem the easier and cheaper way, by hastening the post-pandemic inflow of skilled workers on temporary visas, plus backpackers and overseas students.

But though employers have used high levels of immigration to keep wages low and reduce the need for educating and training our own young people, I doubt they’ll be able to return to that lazy, second-rate world.

Garnaut says immigration is much more likely to raise, rather than lower, average real wages if it’s focused on the permanent migration of people with genuinely scarce and valuable skills that are bottlenecks to valuable Australian production, and which cannot be provided by training Australians.

The other much-praised speech at the jobs summit came from the boss of the Grattan Institute, our top independent think tank, Danielle Wood. Garnaut and Wood had the same message: with the unemployment rate down to 3.4 per cent, we must seize this chance to return to the “full employment” Australia hasn’t enjoyed since Garnaut (and I) were growing up in the 1950s, ’60s, and early ’70s.

Wood wants achieving and maintaining full employment to be our “economic lodestar”. Already being so close to it “means that more people who want a job now have one. It means that some people otherwise at the fringes of the labour market – young people looking for their first job, people with a disability, older workers, and the long-term unemployed – are now seeing doors open in ways they haven’t in the past,” she said.

“When unemployment is low, it lowers the cost of leaving a bad job and finding a better one. This is good for productivity.

“Poor-performing businesses that survive, not on the strength of their products or services but off the back of exploiting their workers, are driven out. Investments and workers flow instead to better-run businesses.

“And when workers are harder to find, businesses have an incentive to invest in new equipment and processes, which ultimately boosts productivity and drives higher living standards,” she said.

Garnaut agrees. “Full employment is hard work for employers,” he said. “Many prefer unemployment, with easy recruitment at lower wages. Yet full employment has advantages for many employers. It brings larger and more stable demand for consumer goods and services for businesses selling in the Australian market.

“And for employers who identify as Australians, it brings enjoyment of a more cohesive and successful society.” Sounds good to me.

The Opinion newsletter is a weekly wrap of views that will challenge, champion and inform your own. Sign up here.