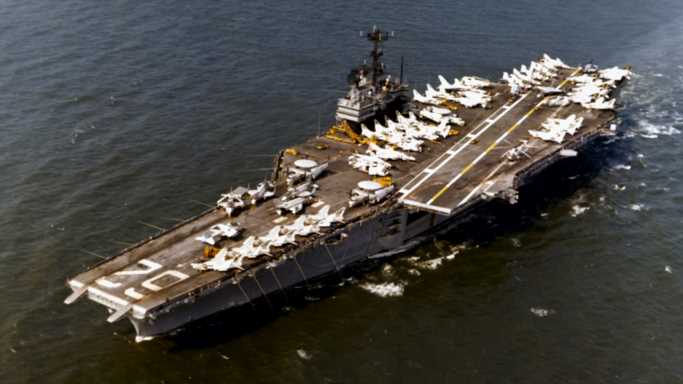 For centuries, shipbuilders have sought to produce the fastest vessels on the seas, capable of cutting through the water to explore new worlds, or to gain strategic advantage over other navies. There have also been races, such as the 170-year old America’s cup, which each year involves millions of dollars of investment as teams tried to leverage cutting edge technology to make their boats as fast as possible.

The fastest boat on record belongs to Australian racer Ken Warby, whose Spirit of Australia reached an astonishing 317.68 miles per hour in 1978. But the small, wooden, jet-powered hydroplane was designed for only one purpose: rocketing in a beeline across still water. (And this is the largest yacht in the world.)

By comparison, nearly all of the fastest boats for military or law enforcement purposes can reach top speeds of 52 to 74 mph — slowpokes compared to Wardy’s watery hot rod. Still, for vessels ladened with crew, armaments, ordnance, and equipment, the fastest warships move at formidable speeds in many of the harshest weather conditions.

To determine the fastest warships, 24/7 Wall St. reviewed a list from educational content outlet Owlcation. Owlcation converted knot speed to miles per hour, and vessels were ranked by their top speed.

From small and stealthy submarine hunters to wave-slicing interceptors, these boats (past and present) maximize their ability to move quickly while maintaining operational defensive and offensive capabilities. Some of these ships are enveloped with radar-absorbent material that greatly reduces their chances of showing up as a blip on an enemy’s radar screen. Others can lob missiles at water and coastal targets. A few are hydrofoils, whose hulls rise above the water as they gain speed. The fastest of them all is a Soviet-era plane-boat hybrid.

The largest of the fastest warships are U.S. Navy Littoral Combat Ships, or LCSs, that can cruise at nearly 51 miles per hour, impressive for a 400-foot-long ship weighing up to about 3,200 tons. Among the smallest of these fast military vessels is the 49 foot Interceptor DV15 RWS, which can reach a top speed of nearly 57 mph while defended by large machine guns. (Not the fastest, but this is the world’s largest warship.)

Here are the world’s fastest warships