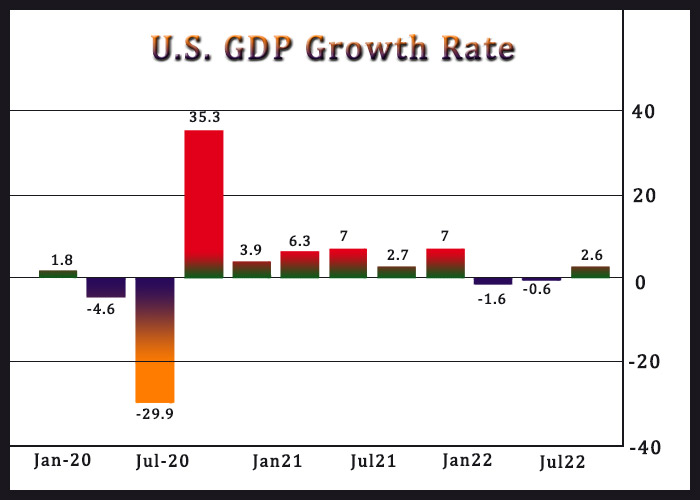 The report said real gross domestic product shot up by 2.6 percent in the third quarter following a 0.6 percent drop in the second quarter and a 1.6 percent slump in the first quarter. Economists had expected GDP to jump by 2.4 percent.

The rebound in GDP largely reflected a 2.8 percent boost from trade, as exports soared by 14.4 percent and imports, which are a subtraction in the calculation of GDP, plunged by 6.9 percent.

A 1.4 percent increase in consumer spending also contributed the GDP growth, as a 2.8 percent jump in spending on services more than offset a 1.2 percent drop in spending on goods.

“Overall, while the 2.6% rebound in the third quarter more than reversed the decline in the first half of the year, we don’t expect this strength to be sustained,” said Paul Ashworth, Chief North America Economist at Capital Economics.

“Exports will soon fade and domestic demand is getting crushed under the weight of higher interest rates,” he added. “We expect the economy to enter a mild recession in the first half of next year.”

The report also showed the annual rate of growth in core consumer prices, which exclude food and energy prices, slowed slightly to 4.9 percent in the third quarter from 5.0 percent in the second quarter.