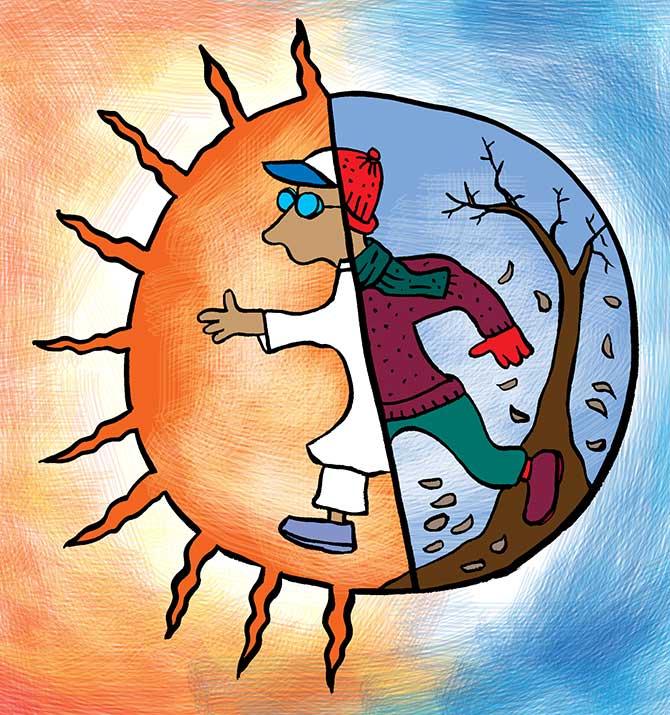 Brace for some warmth this winter as the India Meteorological Department (IMD) in its December-February forecast on Thursday said that the minimum and maximum temperatures could remain ‘normal’ to ‘above normal’ over most parts of Northwest and Northeast India. Both the minimum and maximum will remain below normal in Southern Peninsular and Central India in these winter months.

While this could give some respite from the intense cold of North India, it could have a negative impact on the standing rabi crops if the temperature rise is unusual and abnormal.

Wheat is sensitive to high temperature during reproductive stages, compared to the vegetative stages.

“Both the maximum and minimum temperatures will remain ‘normal’ to ‘above normal’ in Northwest India due to the interaction of large-scale weather phenomena that include the prevailing La Niña conditions,” said IMD director-general Mrutyunjay Mohapatra at a press conference on Thursday.

He said the ‘above normal’ temperatures will also be due to less cloudiness and below-average rainfall, leading to day temperatures staying high.

On the impact of slightly warmer winters on standing rabi crops of North India, namely wheat and mustard, Mohapatra said the impact will depend on the stage of the crop.

Last year, India’s wheat production suffered a significant drop in production due to a sudden rise in terminal heat just weeks before the final harvest.

For December, the IMD said the monthly rainfall over South Peninsular India — comprising five meteorological subdivisions of Tamil Nadu, Puducherry and Karaikal; Coastal Andhra Pradesh and Yanam, Rayalaseema; Kerala; Mahe; and South Interior Karnataka — is most likely to be normal (69-131 per cent of the long period average).

Monthly rainfall this month is most likely to be ‘normal’ to ‘below normal’, except some areas of South Peninsular India and some pockets of extreme Northwest India where ‘normal’ to ‘above normal’ rainfall is likely.

The Met department also said that in December, the monthly minimum temperatures are most likely to be below normal over most parts of Peninsular India, many parts of Central India, and some parts of Northwest India.

It said ‘normal’ to ‘above normal’ minimum temperatures are most likely over most parts of Northeast India and some parts of East and Northwest India this month.