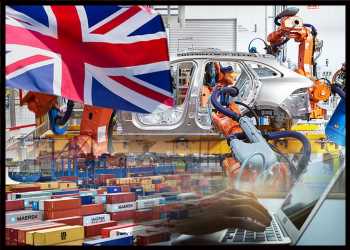 The UK economy unexpectedly expanded in November as the FIFA World Cup boosted sales of food and beverages, data from the Office for National Statistics revealed Friday.

Gross domestic product grew 0.1 percent on a monthly basis in November, confounding expectations for a fall of 0.2 percent. Nonetheless, the pace of growth eased sharply from 0.5 percent in October.

On a yearly basis, the economy expanded only 0.2 percent in November after October’s annual growth of 1.1 percent.

“Today’s GDP figures for November provide further evidence that UK economic growth is heading in the wrong direction, despite this period normally being among the busiest for the retail sector,” said David Bharier, head of research at the British Chambers of Commerce.

Manufacturing output was the main driver of negative production growth in November, falling 0.5 percent, which was bigger than economists’ forecast of -0.2 percent. This has partially offset the 2.8 percent increase in mining and quarrying.

At the same time, the construction sector remained flat after growth of 0.4 percent a month ago.

The visible trade gap of the UK widened to a three-month high of GBP 15.62 billion in November from GBP 12.25 billion in October. The deficit was bigger than economists’ forecast of -GBP 14.9 billion.

The value of goods imports increased GBP 1.8 billion or 3.5 percent in November and the value of exports rose slightly by GBP 0.2 billion or 0.7 percent.