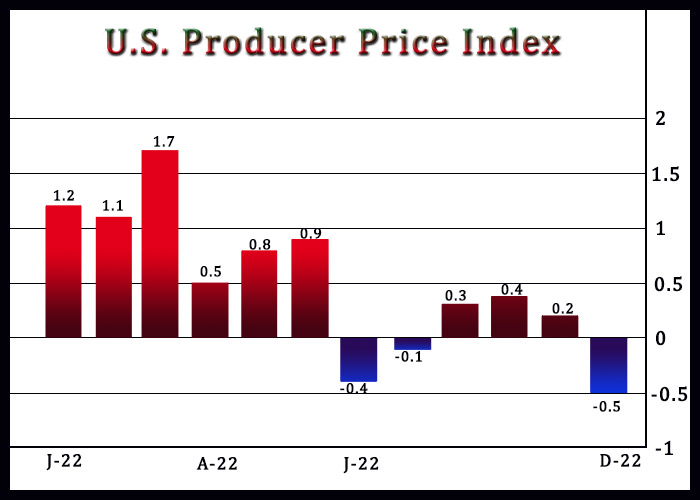 Partly reflecting a steep drop in energy prices, the Labor Department released a report on Wednesday showing U.S. producer prices fell by more than expected in the month of December.

The Labor Department said its producer price index for final demand declined by 0.5 percent in December after inching up by a revised 0.2 percent in November.

Economists had expected producer prices to edge down by 0.1 percent compared to the 0.3 percent increase originally reported for the previous month.

The report also showed the annual rate of producer price growth slowed to 6.2 percent in December from 7.3 percent in November. The year-over-year growth was expected to slow to 6.8 percent.

The bigger than expected monthly decrease in producer prices came as energy prices plummeted by 7.9 percent in December after plunging by 3.2 percent in November. The steep drop largely reflected a 13.4 percent nosedive by gasoline prices.

The report also showed a sharp pullback in food prices, which tumbled by 1.2 percent in December after surging by 3.3 percent in November.

Meanwhile, the Labor Department said prices for services inched up by 0.1 percent in December after rising by 0.2 percent in the previous month.

Excluding prices for food, energy and trade services, producer prices crept up by 0.1 percent in December after climbing by 0.3 percent in November.

“The downside surprise in the December PPI report reaffirms our expectations for headline PPI inflation to cool markedly in the months ahead, though much of latest decline can be attributed to the volatile final demand for energy, tempering some of the positive news,” said Matthew Martin, U.S. Economist at Oxford Economics.

He added, “We do not expect outright year-over-year declines to the headline index in 2023, but inflation should fall below the 2% mark by the second quarter of the year.”

Last Thursday, the Labor Department released a separate report showing a modest decrease in U.S. consumer prices in the month of December.

The report also showed the annual rate of consumer price growth slowed to 6.5 percent in December from 7.1 percent in November, in line with expectations. The annual growth was the slowest since October 2021.

The annual rate of core price growth slowed to 5.7 percent in December from 6.0 percent in November. The year-over-year growth was also in line with expectations.