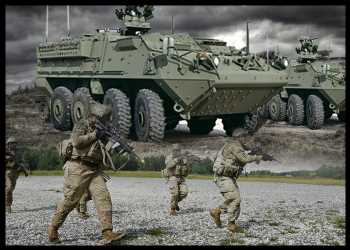 The United States has announced a whopping $2.5 billion security assistance package for Ukraine that includes Stryker armored vehicles capable of providing highly efficient air defense against an array of aerial threats from Russia.

The latest tranche of U.S. security package, which contains hundreds of armored vehicles, critical support for Ukraine’s air defense and other important capabilities, is the second largest announced by Washington.

This is the 30th drawdown of U.S. arms and equipment for Ukraine authorized by US Secretary of State Antony Blinken since August 2021.

With this, the U.S. commitment in security aid to its ally since the beginning of the Russian invasion in February last year has totaled $26.7 billion.

The Russian forces’ most recent air attacks had a devastating impact on Ukraine’s critical infrastructure.

The additional NASAMS munitions and Avenger air defense systems will help Ukraine counter a range of short and medium range threats and bolster it’s layered air defense, according to the Pentagon. The 59 Bradley IFVs included in this package, together with the 50 Bradleys previously committed on January 6, and the 90 Stryker APCs will provide Ukraine with two brigades of armored capability.

Announcing the package ahead of Friday’s Ukraine Defense Contact Group meeting in Germany to discuss more aid to Ukraine, Antony Blinken said, “Russia alone could end this war today. Until it does so, we will stand United with Ukraine for as long as it takes.”